The Glass Sellers’ Company supports a number of education related causes. The awards are given each year at the discretion of the Trustees.

The Abbott Scholarship Fund was founded in 1875 by Past Master John Abbott in honour of the then headmaster of the City of London School, the Rev. E.A.Abbott, D.D.. It was originally intended to pay a bursary to a deserving student entering Oxford or Cambridge University.  We now also welcome applications from students at the City of London School applying to Russell Group Universities.  The fund is no longer able to cover a full scholarship but pays a bursary to help him cover living expenses during his time at university.

The Frederick Stuart Award is made annually to a post-graduate student in memory of the founder of Royal Stuart Crystal. It supports the student’s tuition fees at the Dudley International Glass Centre.

The Glass Sellers’ Award is a grant from our own Charity Fund. It is awarded annually to an undergraduate student to support their tuition fees.

The Glass in Society Project 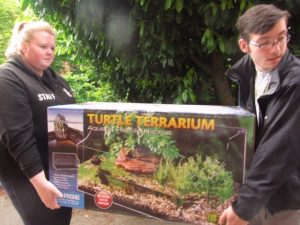 The Glass in Society project began in 1990 with a grant to Wath-upon-Dearne Comprehensive School, Rotherham. Pupils undertook a project with a wide-ranging brief, which included subjects such as the history of glass, glass manufacture, glass blowing and even the physics of the material. Subsequent funding has made it possible for the benefits to be incorporated into the National Curriculum.

Over the years schools and colleges from London to Plymouth and the West Midlands have taken part in the initiative and provided enjoyment and a valuable learning experience for all the students involved.

The amount of financial assistance that we can give to this scheme means that it can only ever assist a small number of schools. However thanks to support from other charitable trusts we are able to achieve much wider coverage across the country.