Joseph Ataman was awarded the Abbott Scholarship bursary in 2011 and was paid annually for the three years he attended St John’s College, Cambridge. We’ve recently caught up with him and he has outlined his adventures since leaving Cambridge.

From City of London School for Boys, I went on to read Geography as a choral scholar at St John’s College, Cambridge, graduating with a first-class degree in 2014. Soon after I moved to Beirut to learn Arabic to start a career as a freelance foreign correspondent. I covered migrants and religious minorities in the Lebanon, as well as the war against ISIS in Iraq, before accepting a Fulbright Journalism Scholarship to study for a Masters in Arabic, Turkish and Middle Eastern Studies at Harvard University.

After two years stateside, witnessing the Trump election and including a stint with The Wall Street Journal in Brussels during the Brexit vote, I then moved to Istanbul as an Overseas Press Club Fellow with the Associated Press.

Since 2018, I have been working as a video journalist for CNN out of London and Paris, covering Europe and the Middle East, and I am currently producing two documentaries on the aftermath of migration.

Mustafa Akyol on Turkey, Religion, and the Future of Turkish Politics with Joseph Ataman

I would just like to add that I remain immensely grateful of the support that the Abbot Scholarship offered as I entered University.

Only in hindsight can I really appreciate the security and peace of mind that the bursary provided during an otherwise challenging, if incredibly rewarding, few years. Please pass my thanks on to your fellow members of the Worshipful Company of Glass Sellers of London. 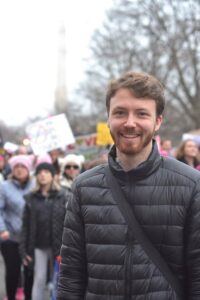 The picture is from a reporting trip I made to cover the Women’s March that coincided with Donald Trump’s inauguration.