Catching up with past beneficiaries of the Company Abbot Scholarship awards, we were delighted to hear from Cumar’s twin brother Logan –

It’s great to hear from the Company. The Abbott Scholarship helped me a lot during my time at university.

With the help of the Abbott Scholarship, I was able to have a very enjoyable four years at Cambridge, studying Structural Engineering and making lifelong friends. Attending Cambridge gave me the opportunity to meet many interesting people, try new things and most importantly, develop as a person. One of the highlights of my time at Cambridge was being involved with the relaunch of Selwyn May Ball (in 2015). This was the first Selwyn May Ball for a couple of decades and I would not have had the opportunity to be a committee member if I didn’t attend Cambridge with its rare collegiate system.
Post-graduation, I was unsure of what I wanted to do as a career. That summer, I helped run summer camps in Cambridge before volunteering for a charity that taught basic computing skills to children in rural South India. While in India, I was told about an opportunity teaching A Level Maths in mainland China, I thought, “Carpe diem!”, and one month later, I was in Zhejiang Province.
A change in visa regulations meant I was unexpectedly unable to return for the 2017/18 academic year.A friend was moving to Hong Kong in winter 2017 and I decided to join him, working in the education sector in Hong Kong for two years, focusing on preparing students for the entrance exams for top British schools as well as GCSEs and A Levels. While I enjoyed being an educator, I knew this was not what I wanted to do as a long term career. I wanted a new challenge, so I took a short term contract at an early-stage Singaporean start-up, specialising in the AI field, working closely with the CEO and COO on the GTM strategy, long-term business plan and pitch decks.
I’m now back in the UK and plan to develop my long term career here, while still enjoying tutoring students on a freelance basis.
I’d like to thank the Worshipful Company of Glass-Sellers for the support of the Abbott Scholarship. If I had not attended Cambridge, I would not have developed into the person I am today or had the opportunity to live in three foreign countries. I’m glad to see the scholarship continues to be offered and look forward to hearing stories from other scholars.
Below is an image taken at one of Hong Kong’s Country Parks. I feel this photo shows a side of Hong Kong that people may not know about. 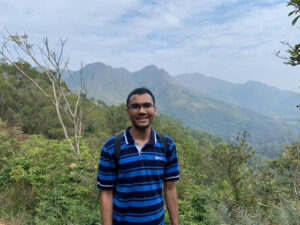