Regularly as Liverymen we are reminded of the engrained provenance of the Great City of London steeped in tales of matters past and the traditions it strives to uphold. The Summer Solstice in mid-June also has significant meanings. As the arrival of Midsummer’s Day or the official start of Summer. Drifting forward from the darkness of Winter and renewal of life in Spring now a time of fertility and growth. Honouring the power and strength of the Sun.

Liveryman are called just after this great festival to attend Common Hall at the Guildhall to elect the municipal officers and Sheriffs for the coming year. Their predominant role to support the Lord Mayor in their official duties undertaken on behalf of the City of London Corporation. At Common Hall on Monday 25 June 2018, Alderman Vincent Keaveny and Liz Green were elected as Sheriffs for the City of London. They will take up office in September 2018.

So too Glass Sellers are called to attend their Summer gathering preceded by Evensong at St. James Garlickhythe. The Court as usual met in the afternoon and then paraded to St James led by the Beadle. The service led by the Company’s Honorary Chaplain the Reverend Canon Philip Need and the Priest in Charge Fr. Tim Handley.  The company was also delighted to experience the nifty fingers of Glass Seller, Late Lord Mayor and Past Master, Alderman Sir Andrew Parmley at the organ with choristers to sing the service. Rousing hymns heartened the throng culminating in joy of a Summers day. 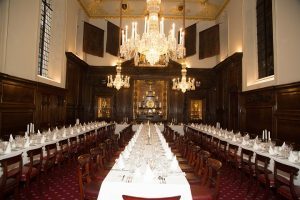 Liveryman returned to the splendour of the Vintners’ Hall for a reception and the Court and Livery Dinner.

Summoned by the Beadle and after a refreshing glass or three of bubbling Prosecco we drifted into the magnificent chandelier lit Hall to take our places. The Master John Poulten called all to Order and expressed a hearty welcome to all. A moment’s silence was called in remembrance of Liveryman John Leslie Pratt who had recently and rather unexpectedly passed away. 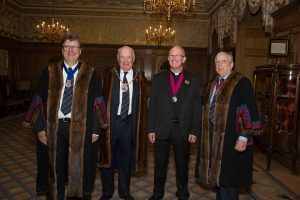 The Master proceeded to invite the Hon. Chaplain to say Grace. A prose of seasonal sport, current affairs quandary and thanksgiving.

The gathering sat and Dinner commenced with Beetroot cured Salmon, Roasted Guinea Fowl and Lemon Zest Parfait more than adequately accompanied by a White Chardonnay from Spain and Red Gran Reserva from Chile. Appetites satisfied time to sing Grace and to traditionally pass the Loving Cup.

The Master led the toasts, The Queen, Members of the Royal Family and the Lord Mayor and City of London Corporation.

Liveryman Ray Auvray welcomed the guests of Liveryman and ended with a detailed introduction to The Master’s Guest Mr Mike Brace CBE DL who was to respond on behalf of the guests.

Michael Thomas “Mike” Brace CBE is a former paralympic skier, social worker and leader of disabled charities. He was Chief Executive of Vision 2020 UK and served as Chairman of the British Paralympic Association.

Mike’s address was a refreshing and light-hearted delivery of how he had coped with a life that had evolved having lost his sight at the age of 10 due to a firework explosion. Embracing life as opportunities rather than that of handicap he had adventured on many different paths. He was accompanied by his wife and his guide dog Izzy which he acquired in 2010. The company laughed as he guided us through a few of his exploits of amusement over the years. He closed with the toast “To the Glass Sellers’ Company may it flourish, root and branch forever. And Good Health to the Master.

The Master rose to bid all a Good Evening proposing the toast to “Glass” and inviting all to a Stirrup Cup, the Beadle announced where it was to be held.

The Company retired some saying adieu till the next time, others for a libation or two more, before venturing into the twinkling lights of a balmy Summer evening and heading to their homes till they were called again to gather.