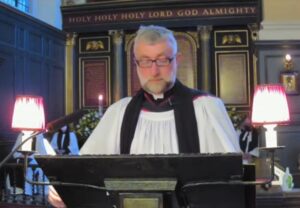 It is with great pleasure to report and offer the Glass Sellers of London’s Hearty Congratulations to Father Tim on his installation as the Parish Rector of The Parish of Saint James’s Garlickhythe, with Saint Michael, Queenhithe and Holy Trinity-the-Less.

The ceremony took place on Monday the 26th of April 2021 at 19.30 hours. at St James’s. The ceremony was performed by the Bishop of London, Bishop of Fulham, and the Archdeacon of London, as well as Glass Sellers, Liveryman Sir Andrew Parmley at the organ. 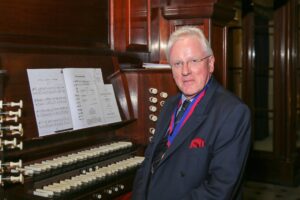 Rev Tim Handley SCC was appointed as Priest in Charge in September 2017.

The Glass Sellers Company was represented by Past Master Martin Scarth and wife Elisabeth who regularly attend the Church.

St James Garlickhythe is the church of the Worshipful Company of Glass Sellers of London and has been so for many years.

Like so many of our City churches, the history of St James is one of survival through war, fire, drought, disease, and misfortune.

It’s thought a church has stood on Garlick Hill since Anglo-Saxon times. It is first mentioned as the ‘ecclesia Sancti Jacobi’ in a will dated between 1096 and 1115. The first known Rector was Peter del Gannok in 1259.

It was rebuilt in the fourteenth century by Richard de Rothing and his son John, both Vintners. The medieval church was considerably smaller than the current building, and there is a record of an adjoining cloister on the site.

This may well have existed for a religious guild for men and women which was founded in 1375. By the following century, St James had become a collegiate church with several chantry chapels served by priests who were provided with quarters, which came to be known as ‘St James Commons’.

Six Lord Mayors were buried in the medieval church, a sign of its importance. They are now commemorated by plaques on the north wall.

In 1538, Henry VIII ordered churches to keep a register of births, deaths and marriages. Those at St James Garlickhythe are the oldest in England, the first entry being the Baptism of one Edward Butler on 18th November 1535. William Boyce the composer was baptised here on 11th September 1711.

The ancient registers and other City records can be seen in the Guildhall Library.