It had to be noted that the Glass Industry was in great turmoil at the end of the 19th Century and Early 20th. Much was happening on the World stage.
The Glass Sellers Company was also busy and playing its part.

1915 was also the year when W.E.S Turner began a mission to revolutionise the UK Glass Industry.

Friday 20th June 1924.
An invitation was received from Professor Turner, D.Sc. to the members of the Court to visit the Department of Glass Technology at Sheffield University.

Thursday 18th June 1925
In accordance with a suggestion made by the Department of Glass Technology as the Sheffield University, it was resolved that the Master for the time being should serve on the Committee of the Glass Delegacy of the University.

Thursday 17th June 1926
It was arranged that the Master and Wardens should attend, as delegates on behalf of the Company, the coming-of-age celebrations of Sheffield University on 30th June and 1st July. 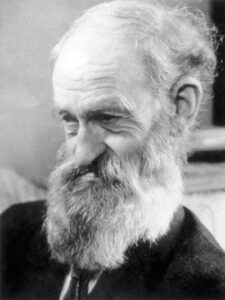 So, the story of William Ernest Stephen Turner:
He was born 22nd September 1881 in Wednesbury, Staffordshire to William and Blanche Turner, the second of seven and their first son. His father, was self-educated a man of strong Christian principles, was variously railway porter, signalman, ironworker, postman & insurance agent. Against the odds, including polio at 3, Turner excelled. At age at the age of 12 Turner was awarded a Staffordshire County minor scholarship from the Crockett’s Lane Board School, Smethwick and when he was 13 gained admission to King Edward VI Grammar School Five Ways, Birmingham. Tremendous sacrifices must have been demanded of the family to make it possible for Turner to continue his education. He was apparently a brilliant pupil and won many prizes while at school. He entered the then Mason University College in 1898 with a school leaving scholarship and graduated with the London degree of Bachelor of Science with honours in chemistry in 1902. He was awarded a Birmingham University Research Scholarship and began research work under Dr Alex Findlay. He became M.Sc. (Birmingham) in 1904 and was awarded the Erhardt Research Prize.

In 1904 he was appointed assistant lecturer in Physical Chemistry at the University of Sheffield. Characteristically his first observation was the lack of order in its chemical stores. His organisational skills quickly remedied this. He was keen to apply his knowledge to industrial processes and began lecturing to local metallurgists, even offering evening classes. He wrote on science and industry in the local press (1909) and became President of the Sheffield Society of Applied Metallurgy (1914).

In July 1914 came World War 1. Following Turner’s suggestion to his vice-chancellor, the University commissioned a scientific advisory committee in September 1914 to help manufacturers adapt. Inevitably he was appointed secretary. World War 1 also proved a wake-up call to the UK glass industry which had become moribund, relying on secret recipes passed down the generations and unable even to measure furnace temperature. The sudden lack of imports from the continent required them to:
1. extend their product range, particularly in laboratory ware and optical components.
2. source raw materials locally
3. adapt their technologies.

Firms in Rotherham, Mexborough and Barnsley were quick to seek help, and Turner was quick to respond. In May 1915, a report on “The Glass Industry in Yorkshire” proposed that a centre for research and teaching on glass manufacture be created. In June, the proposal became a reality, led by Turner. Initially the Department of Glass Manufacture it soon became the Department of Glass Technology, the first in the world.

Unusually it was administered by a “Glass Research Delegacy”, with members from both University and Industry, not by the University Council. The freedom this gave Turner meant he was not always popular with his academic colleagues but then orthodoxy would have been a serious handicap to a man of Turner’s foresight and drive for innovation. He particularly appreciated the lack of a direct telephone link to the Vice Chancellor.

Turner soon strengthened his links to Industry by creating “the SGT”, which first met formally in November 1916. Wisely, the SGT selected its first president from Industry, Frank Wood of Wood Brothers, Barnsley, with Turner as secretary. Its aim was to strengthen collaboration not only between University and Industry but also between its industrial partners. Turner perceived that these inward-looking firms shared many problems best solved by working collaboratively.

The SGT offered a forum for frank discussion of common issues. From 1917 it was enhanced by adding a library, an information database and publishing transactions of meetings and research proceedings in its Journal of the Society of Glass Technology. Early issues remain an amazingly rich source of knowledge, both the physical chemistry of making glass and its properties. SGT still maintains this philosophy and is celebrating its centenary with an international conference and several colloquia (www.sgt.org).

After the war Turner, with almost missionary zeal, began contacting international Glass experts. In the 1920s he was negotiating with Prof Gehlhoff of the DGG in Germany, and others in the USA, France, Belgium, Italy, and Spain. Reciprocal conferences and factory visits became almost commonplace and in 1933 led to the foundation of the International Commission on Glass (ICG), still active and represented in 33 countries (www.icglass.org).

During these visits, Turner acquired a significant Glass Art collection, often pieces created uniquely for him, or experimental samples by eminent artists. In 1943, he donated it to the University, where it forms the Turner Museum of Glass. He also received many awards (e.g., OBE, FRS, DSc) and yet more from overseas. Even after retiring (1945) he remained active until his death in 1963.

By 1955 the University was pursuing fundamental research alongside industrial trouble shooting, and this entailed different funding streams. To solve the associated administrative issues, the British Glass Industries Research Association (BGIRA), now Glass Technology Services (GTS), was created and housed in a new building next door. Subsequently (2003) this moved to Chapeltown, Sheffield. Both the SGT and the Glass Manufacturers Federation (GMF) formed by the merger of various glass trade organisations now share the same home.

Professor Turner’s legacy is enormous and retains an ability to adapt in a changing world.