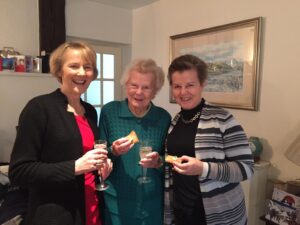 Though not a Liveryman we are saddened to announce the passing of the wife of Past Master Rob Marshall – Jean Marshall and Mother to Alison Knocker and Julia Hawkins. Jean played a great part in the “Glass Sellers Family” both in supporting her husband during his year as Master but also had a very interesting life which is illustrated by the following text provided by son-in-law and Past Master, William Knocker.

Jean and (Past-Master) Rob Marshall were married for 66 years. They met in 1942 at Law School shortly before both volunteering for RN/WRNS service.

From 1943 – 45, Jean was recruited into the team charged with breaking the German Enigma code. She worked in watches until VE Day at Eastcote, an outstation of Bletchley Park, setting up code combinations on the ‘Bombes’ as part of the decryption process using Alan Turing’s machines. She kept her involvement on this work from all, including husband and family, until 1974 when the secret was out. She always said the breaking of the secret felt like an act of betrayal but was then surprised and amused to discover at a family Sunday lunch her brother-in-law was also involved in the same process, as an operator in an intercept communications station in Italy.

After being demobbed, Rob and Jean both completed their studies and were admitted to the Roll of Solicitors in 1948. Previously Jean had always set her sights on University and Medicine but her solicitor father insisted that she continue the family tradition, so she joined his firm. They married in 1950.

Jean enjoyed her time practicing Law and the openings it gave her, including membership and indeed chairmanship of the 1919 Club (now Association of Women Solicitors), for which she was asked to organise a conference for American Women Lawyers. That experience plus an Art History course led to her involvement in many foreign NADFAS Tours. And this in turn provided Rob with ‘professional’ support as mastermind and organiser of his Jolly to Venice in his Master’s year of 1989; a Jolly that’s still remembered fondly today!

And it was during Rob’s Year, when the Master was hosting a livery dinner, that Jean organised a simultaneous dinner for wives, with speaker, at the Law Society. This was much approved of by the attendees and was the beginning of the liberalisation of the Glass Sellers to include wives and partners both at events and as members of the Livery in their own right.

Jean trained as a City of London Guide, and she and Rob loved the City and all its traditions, including the livery movement and of course the Glass Sellers in particular. Their many friends throughout the Livery will recall the Rob and Jean ‘partnership’ with much warmth, as reflected in the welcome given Jean at her last Glass Sellers occasion, sadly without Rob, at son-in-law Past Master William Knocker’s Mansion House Banquet in 2016. 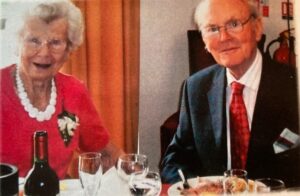