Was born in Chesham, Buckinghamshire, in 1843. He was the son of a draper.

By 1859 he was apprenticed to a draper, but he instead took a job at Farmer and Rogers, which specialised in women’s fashions in Regent Street By 1862, the year of the International Exhibition, he was manager of the warehouse.

After Farmer and Rogers refused to make him a partner in their business, Liberty, decided to open his own shop selling ornaments, fabrics and miscellaneous objects d’art from Japan and the Far East. 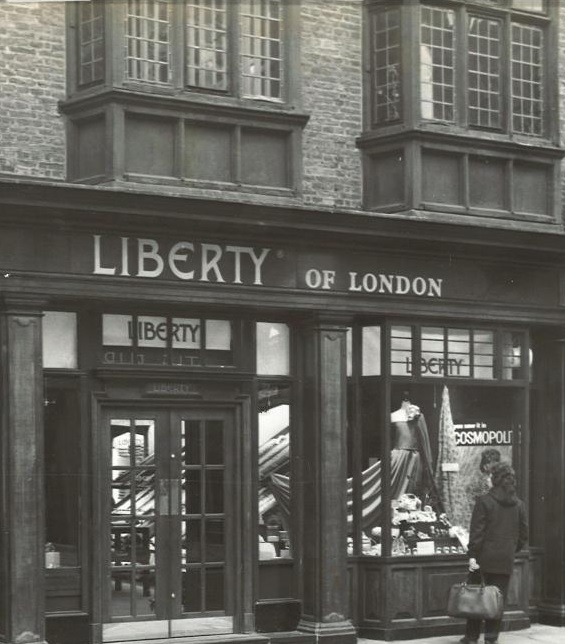 With a £2,000 loan from his future father-in-law, he accepted the lease of half a shop at 218a Regent Street with three staff members. The shop opened during 1875 and within eighteen months, he had repaid the loan and acquired the second half of 218 Regent Street. As the business grew, neighbouring properties were bought and added.

Arthur’s local connections through his birthplace of Chesham and his grandparents’ home at Chartridge Farm led naturally to his desire to live in the area again. In 1880 he moved into the Manor House at The Lee, initially renting it from the absent Plaistowe family, and in 1898 he bought the manor estate from them. He extended the estate to cover over three thousand acres, stretching well beyond the parish boundaries. The estate eventually comprised twelve working farms, many houses, and cottages and lots of pubs. He also did much to improve the village, including new cottages, fresh water to The Lee pumped from Missenden valley, a village green, cricket pitch, football ground and, in 1911, improvements to the Parish Church.

In 1907 Arthur rebuilt the old village pub but moved it close to the new village green, now seen as the ‘Cock and Rabbit’ .At the same time a large sarsen stone was excavated from Lee Gate and ‘erected’ on the village green where it can be seen today.

In 1911 the parish of The Lee was extended through Arthur’s influence to include King’s Ash, Lee Gate, Swan Bottom, Lee Common, and Lee Clump. This considerably increased the size of the parish both geographically and in terms of population and as a result Arthur revived the custom of “beating the Bounds” which continues today.

The art nouveau style was itself highly influential but few people can claim to have been quite so influential in the history of modern design as Arthur Lasenby Liberty. From the small shop, opened in 1875 on the corner of Regent Street, Liberty was to popularise an idiom now known and revered worldwide simply as “Liberty style”. Importing exotic household goods from the east, within 25 years liberty was commissioning work from some of the finest British Avant-garde designers and retailing in a way that made it accessible to a much larger public.

During the 1880’s and 1890’s Arthur Lasenby Liberty had seen the rise of many workers Guilds. These were organisations based on the tenets and principals of the medieval artisan Guilds. The likes of the Guild of Handicrafts headed by Charles Robert Ashbee and the Birmingham Guild of Handicrafts under the influence of Arthur Dixon had produced works of tremendous quality and beauty.

However, whilst embracing a very refined aesthetic, the Guilds were victims of their own high levels of workmanship. The high man-hours and resulting costs it took to produce their handcrafted pieces ultimately, and somewhat ironically, made their produce very elitist. Like William Morris they relied upon a relatively small but wealthy patronage and struggled for any longevity. In its early days Liberty & Co too had enjoyed the patronage of luminaries such as Burne-Jones, Dante Gabriel Rossetti, Whistler and Lord Leighton but Arthur Liberty was aware of the precarious nature of such dependency.

Liberty was nothing if not a shrewd businessman and realised that if he was to succeed in promoting design to the public at large he would also have to address the issue of high production costs. He introduced continental Art Nouveau to London shoppers, adding chairs by Richard Riemerschmid and ceramics by the Hungarian firm Zsolnay to his offerings. Among the many lines imported by Liberty & Co were Kayserzinn and WMF pewter from Germany. Both of these companies had successfully married cheap production costs with artistic design to produce sophisticated metalware for a mass market.

Unlike the work of the Guilds their products were created using the automated techniques of spinning and die-casting.

In 1884, he introduced the costume department, directed by Edward William Godwin (1833–86), a distinguished architect and a founding member of the Costume Society. He and Arthur Liberty created in-house apparel to challenge the fashions of Paris.

In 1885, 142–144 Regent Street was acquired and housed the ever-increasing demand for carpets and furniture. The basement was named the Eastern Bazaar, and it was the vending place for what was described as “decorative furnishing objects”. He named the property Chesham House, after the place in which he grew up.

The store became the most fashionable place to shop in London, and Liberty fabrics were used for both clothing and furnishings. Some of its clientele were exotic and included famous Pre-Raphaelite artists. 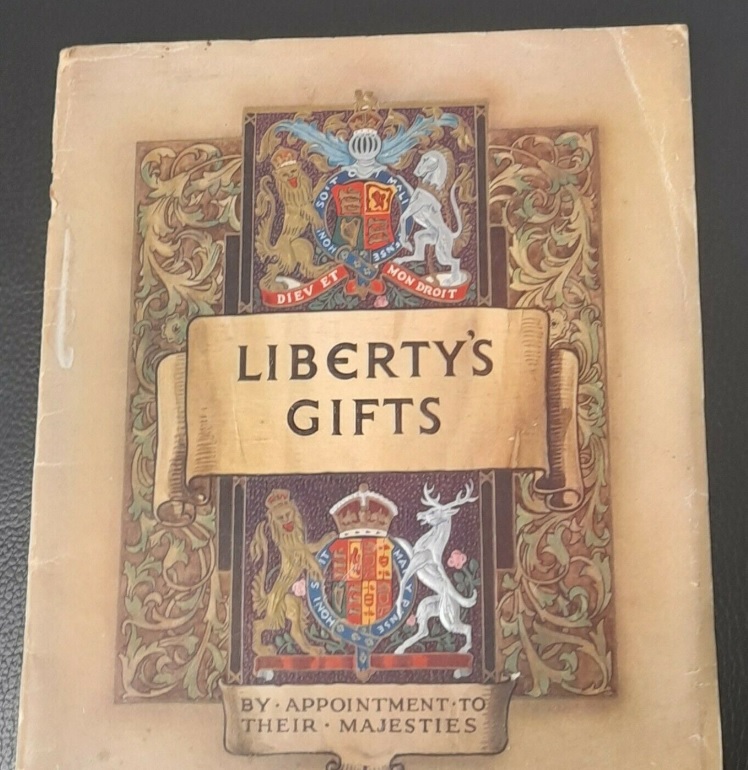 In 1899, Inspired by their success and driven by manager John Llewellyn, Liberty & Co went into production. In that same year they exhibited two small collections of silver ware and jewellery bearing their own assay mark, first at the shop and then at the Arts and Crafts exhibition. Their “Cymric“ range had been born. The machine produced silver and jewellery was hand finished and often decorated with a variety of semi-precious stones, abalone and of course enamel, giving it the appearance of a luxury product. It was three years before the less expensive and more accessible “Tudric” range was introduced. This was made from pewter rather than silver making it available to a wider public. From 1902 a large range of designs were produced in conjunction with the silversmiths W. H. Haseler with glass liners and decanter bodies being provided by James Powell and sons of Whitefriars and glass from James Couper & Sons of Glasgow’s “Clutha” range. Both Tudric and Cymric were produced right into the 1930’s but the early years, particularly between 1902 and 1905, saw the most accomplished and daring designs. It is fair to say that the reputation of both Cymric and Tudric is largely due to the artistry and flair of one man – Archibald Knox.

Merton Abbey Mills was restructured for textile printing in the early 19th century and was acquired by the artist and textile designer William Morris in June 1881 as the new home of Morris & Co.’s workshops. The complex, on 7 acres of land bordering the River Wandle included several buildings and a dyeworks, and the various buildings were soon adapted for stained glass making, textile printing, tapestry and carpet-weaving. Morris refused to destroy existing buildings, and adapted them or built new ones

Liberty & Co. had been involved with the site at Merton Abbey Mills since the 19th century, as their popular ranges of fabrics for dress and furniture were nearly all made there by Littler and Co, William Morris’s immediate neighbours to the south.

In 1904 Liberty & Co took over the Littler site, and then in 1940 the Morris facilities as well. They continued to operate the Merton Abbey Mills until 1972, and textile production was continued by other firms until 1982.

During World War II part of the site was used to construct gun-turrets for the Bristol Blenheim fighter-bomber.

Today Merton Abbey Mills is a crafts market and the site of a summer theatre and music festival called Abbeyfest. A number of buildings from the Morris period, and even earlier, survive, and there are displays on the history of the site.

A watermill still turns in the summer, and the “colourhouse”, a mid-18th century industrial building, built on the foundations of the Priory Chapel, is now a children’s theatre.

The watermill and colour house are both Grade II listed buildings.

Before he died, Arthur Liberty had amassed a small fortune as a majority shareholder in Liberty & Co. – it had become a public limited liability company in 1890. When he died in 1917, he left a manor house, several cottages and a large acreage of farmland around the Lee to his nephew, Ivor Stewart-Liberty.

Arthur had also built a house for his nephew, Ivor Stewart-Liberty. This house called Pipers is just a little way from the green, about 250m from the Cock and Rabbit. At the entrance to Pipers is a wooden figurehead of Admiral Lord Howe taken from the Navy’s last wooden warship, HMS Impregnable (previously called HMS Howe). The timbers of HMS Impregnable and HMS Hindustan were used for the mock Tudor extension to the Liberty store in London. By the 1930s the estate employed around one hundred people directly or indirectly and almost every family was dependant in some way on The Lee Manor estate.

We haven’t yet found who introduced Liberty to the Glass Sellers Company – he was involved with Whitefriars Glass and the Arts & Crafts movement. His membership also coincides with the Burt – Mowlem Family dynasty that provided the Company with five Masters over several years. There was also William Sugg. All were much connected with commerce, construction, and buildings in London at the time. London was buzzing at the turn of the century. 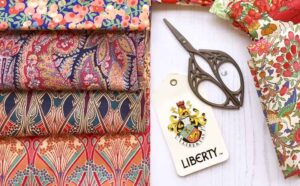