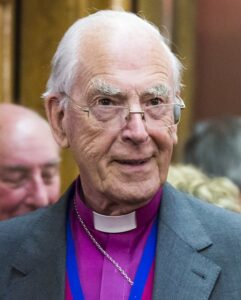 It is an old saying “you’re as old as you think you are”, and certainly age is not an attitude of mind that needs to be adopted – “Age is only a measurement of time”

Bishop John Waine, now celebrating his four score years and ten, certainly does not epitomise the passage of time that has taken place since he entered school at Prescot Grammar School, oh so many years ago. He knew early on that he had a ‘calling’ to the Church and, after leaving school, read Theology at the University of Manchester.

There was then a two-year gap, due to his age at the time. He had to do National Service and opted for the RAF. He was offered a short service commission with the proviso that he had to study Russian. At that time there was a strong need for Russian speakers. He qualified as an interpreter and translator – no doubt this was to be an asset to being a senior cleric!

Then he went on to Ridley Hall, Cambridge for his ecclesiastical training and ordination. His first Curacy was in 1956 at St Mary’s, West Derby and he then moved quite quickly on to being the Vicar at Ditton. His rise up the clerical ladder moved with some momentum and numerous different challenges as he became Vicar of Southport and then went on to Kirby.

Time was passing, and 19 years having passed since first wearing the collar, the next new and big step came – He was invited to become Bishop of Stafford. He was consecrated to the episcopate on 24th June 1975 by Donald Coggan, Archbishop of Canterbury, at St Paul’s Cathedral. He remained at Stafford for three years when, once again, another invitation arrived in 1978.

This next step was that he became Bishop of Suffolk, having the title of Bishop of St Edmundsbury and Ipswich (1978-1986)

At Petertide 1984 (1 July), as Bishop of St Edmundsbury and Ipswich, he made his son, Stephen, a deacon at St Edmundsbury Cathedral. (He is now Dean of Chichester)

His final posting came in 1986 when he was elected to become Bishop of Chelmsford and was enthroned at Chelmsford Cathedral on 31st May 1986. This was one of the most populated dioceses in the country. He retired in April 1996.

In retirement he has served as a lay member on the Press Complaints Commission.

He received an honorary doctorate from the University of Essex in 2002 and was also the Prelate of the Venerable Order of Saint John until 24 June 2007.

With the philosophy of ‘Have Cross, will travel’ his wife Pat has always been of huge support as he worked, and they have brought up their three sons.

What else might be of interest on Bishop John’s life? Clearly, his presence and ability to speak makes him someone rather special.  He was one of the 24 senior Bishops in the country and thus entitled to sit in the House of Lords. He was appointed as Chairman of the Church’s Main Committee and had invitations to preach at some of the biggest venues and cathedrals in the country.

Invitations to speak included Sandringham and Windsor, where he became well known to Her Majesty the Queen and the Royal family. It was on account of this friendship that a special invitation from the Queen followed. She asked him to become “Clerk of the Closet” (1989 – 1997). It’s a very strange title but one with great influence. In lay language, it means Head of the Queen’s Ecclesiastical Household – a Special Advisor to the Queen on Church matters.

He is a fanatical Ipswich Town Football Club supporter and attends all their home matches.

In December 1987 he was appointed Honorary Chaplain to the Worshipful Company of Glass Sellers of London, a post he was to hold until December 2011. He was noted for his rhyming graces at Livery Dinners. He was made an Honorary Liveryman in December 1990, and still remains so.

He remains an active Member of the Court, commanding huge respect for his tact, charm and wisdom, all applied with much humour.