The now launched Annual Lecture will honour his memory and will raise funds for the Glass Sellers Charity. This year’s lecture has raised enough to support more that 3 Glass in Society Projects that run nationwide and enables through a Glass related project the ability for children to learn the ‘Wonders of Glass’.

The Victoria and Albert Museum are quoted as saying: “Katharine Coleman… is perhaps the foremost glass engraver working in Britain today, one of the few committed to working in a contemporary idiom.

Watch the Lecture by Clicking Here

Katharine studied engraving techniques with Peter Dreiser 1984-6 and was shortlisted for the Jerwood Applied Arts Prize 2003 (Glass), awarded an Honorary Mention Prize at the Coburg Glass Prize 2006 and the Glass Sellers inaugural prize for Engraving on Glass 2007. In 2009 Katharine was awarded an MBE for services to glass engraving. She engraves on clear lead crystal forms, overlaid with coloured glass, blown to her design. Once blown and annealed, the top surface of the glass is cut and polished to allow one to see inside the piece, which is then engraved. The engraved decoration reflects and refracts onto the inner surface, creating an illusion of one body floating inside another. The inspiration for her work ranges from natural history to the modern urban landscape. 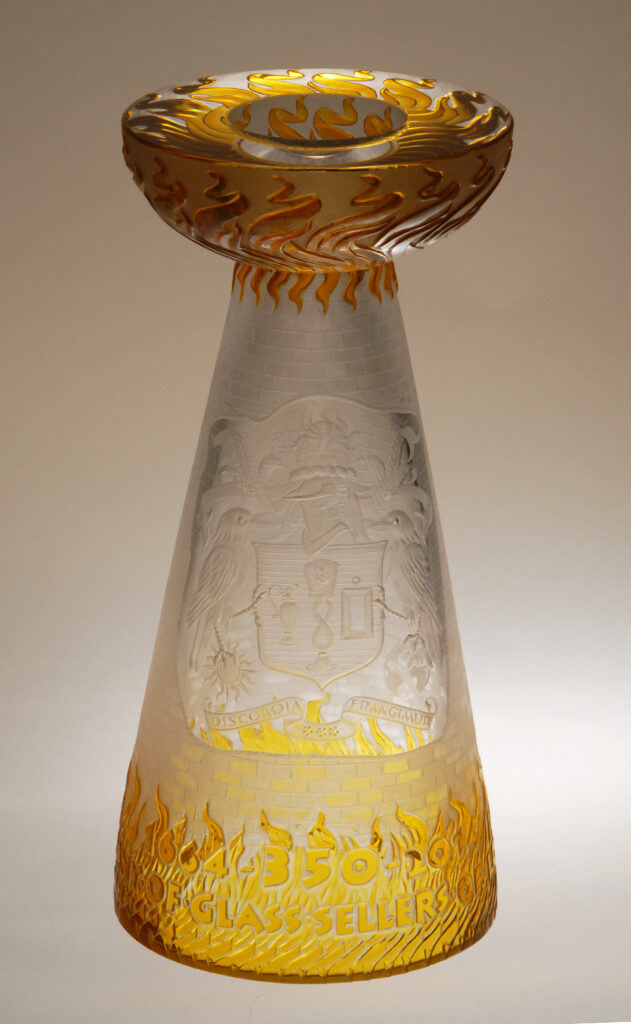 The Glass Sellers’ 350th Anniversary Salt of traditional glass cone form, with yellow glass overlay by Porter Morgan Glass of Cornwall, engraved by Katharine Coleman MBE (Winner of the Glass Seller Trophy 1986)
with the flames of the furnace, the sun and the arms of the Company. Contained in a brown leather carrying case with the Company’s Crest.
The 12.6cm circular top has a 5.7cm bowl recessed into the centre to hold salt. There is also a horn spoon. The glass cone is hollow from a 13cm base and tapers to 4.5cm.
On one side is engraved the new Coat of Arms with below “1664 – 350 – 2014.
The Worshipful Company of Glass Sellers”.
On the other side “Presented By Past Master Michael & Mrs Jenny Nathan”.
Height 29cm, 24cm to top of cone taper.
Donations to the Charity Fund can be made with this link
https://www.justgiving.com/glass-sellers

Donations to the Charity Fund can be made with this link
https://www.justgiving.com/glass-sellers

Ambassador for Glass – the latest instalment of Talking Prompts