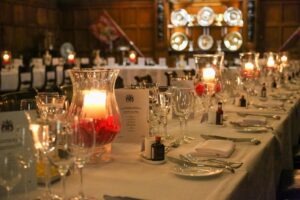 So, it happened as laid down in the Book of Ordinances that the Glass Sellers Company actually met on the Feast of Saint Michael the Archangel for one of its Quarter Court Meetings – 29th September 2021.

Otherwise known as Michaelmas Day. As it falls near the equinox, the day is associated with the beginning of autumn and the shortening of days; in England, it is one of the “quarter days”.

There are traditionally four “quarter days” in a year (Lady Day (25th March), Midsummer (24th June), Michaelmas (29th September) and Christmas (25th December)). They are spaced three months apart, on religious festivals, usually close to the solstices or equinoxes. They were the four dates on which servants were hired, rents due or leases begun. It used to be said that harvest had to be completed by Michaelmas, almost like the marking of the end of the productive season and the beginning of the new cycle of farming. It was the time at which new servants were hired or land was exchanged, and debts were paid. This is how it came to be for Michaelmas to be the time for electing magistrates and the beginning of legal and university terms.

As Michaelmas is the time that the darker nights and colder days begin – the edge into winter – the celebration of Michaelmas is associated with encouraging protection during these dark months. It was believed that negative forces were stronger in darkness and so families would require stronger defences during the later months of the year.

Traditionally, in the British Isles, a well fattened goose, fed on the stubble from the fields after the harvest, is eaten to protect against financial need in the family for the next year; and as the saying goes:

“Eat a goose on Michaelmas Day,
Want not for money all the year”. 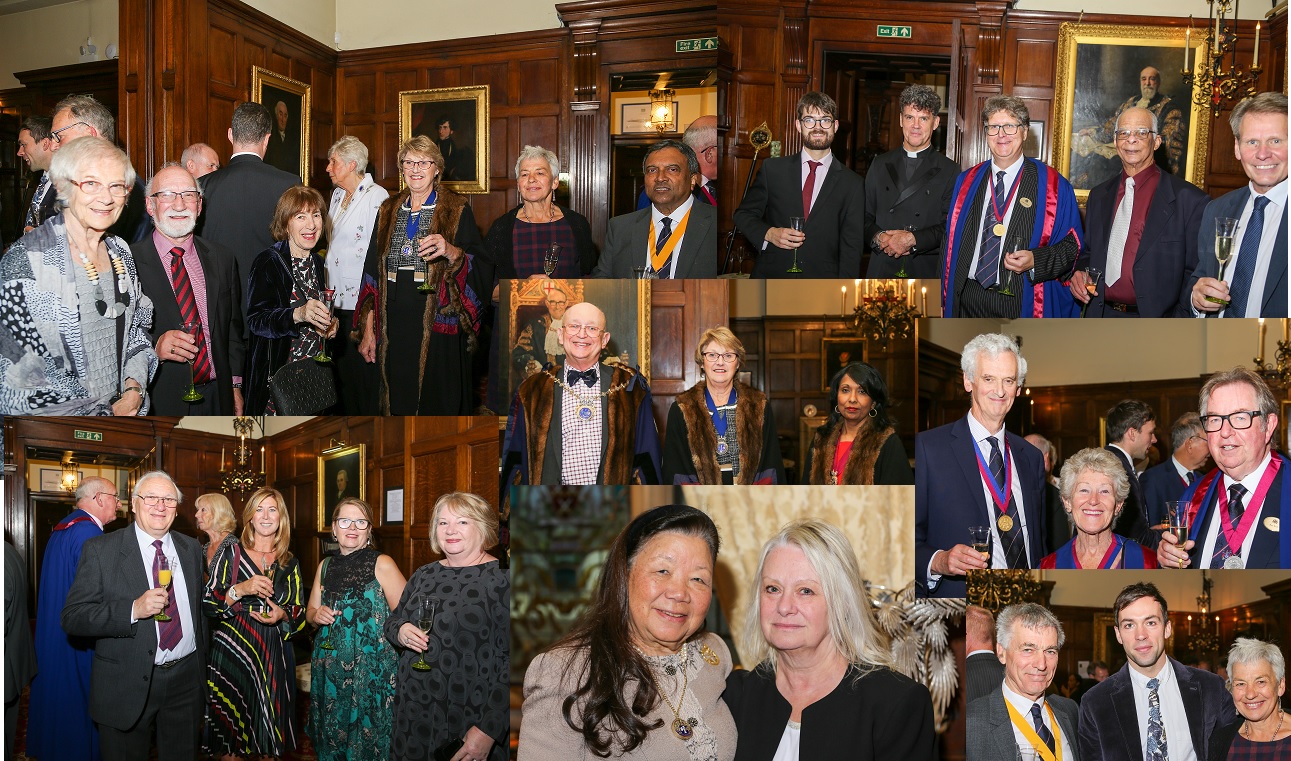 Alas as the Glass Sellers’ Company gathered in the ‘Country House’ Cutlers’ Hall in the heart of the City for it’s third Quarter Day meeting there was no ‘goose’ on the fare of the day. The present ‘House of the Cutlers’ is the fifth Hall built on land in Warwick Lane which had previously been the site of the Royal College of Physicians and came into use on 7th March 1888.

The Members of the Court were the first arrivals for the Court Meeting followed later by Members of the Livery and all welcomed by the Beadle and staff. The Court meeting held in one half of the Court Room. After the meeting, the room was opened for the reception where once more the traditional welcome by the Master and Wardens took place. A new sense of normality after such a long period.

We must however not forget the opportunities that we did have in the past near twelve months. The Masters’ Installation Ceremony at St James’ Garlickhythe in December followed by a luncheon. Our Quarter Day meeting in June at Vintners Hall, Court and Livery Dinner – Evensong at St James’s Garlickhythe in July with a Supper afterwards at Bakers Hall and then a Luncheon at Watermans’ Hall in August.

We have adapted and carried on – and so the bubbles flowed, and people chatted and giggled as friendships were rekindled as if the last time we met seemed like yesterday.

The Beadle called and we were summoned to the Livery Hall upstairs dominated by the Victorian hammer beam roof and high on the wall the Barge Banner used for the Lord Mayors’ procession in 1763 – the Lord Mayor being Alderman Bridgen – a Cutler!

The Hall subtlety lit with wrought iron chandeliers hanging from the ceiling and twinkling glass candle bowls on the table filled with delicate pink rose petals.

The Fare commenced with a Fillet of Irish Salmon and a Tart Tartine of Forest Wild Mushrooms with Hollandaise Sauce accompanied by a Sauvignon Blanc. Onwards

with a Medallion of Highland Venison and a Chateau Pierron 2018 – Just as our taste buds were bursting a new adventure followed with a Toasted Crumpet, Irish Back Bacon and Scrambled Duck Eggs. Much lighter than it sounded and equally as delicious.

Our palates were to be tempted once more as this was followed by Vanilla Parfait with Kent Honey, Lemon Short Bread Biscuit, Belgium Rich Dark Ice Cream and served with a rich chilled dessert wine of De Bortoli Botrytis, Semillon 2009.

Then to a musical interlude. Company guest William Bracken, pianist and winner of the Guildhall School of Music and Drama, Glass Sellers Beethoven Piano Prize 2020.

The first time the Company had, had an opportunity to engage with this very talented musician. His fingers nimbly entertaining us, first with a little classical music and then some light-hearted jazz, ending with a chorus of ‘happy birthday’ for the Prime Warden.

Satisfied with the Fare time for some ceremony, Grace followed by the toast of friends – traditionally the ancient ceremony, the passing of the Loving Cup now adapted, considering cautions of recent times.

Glasses were raised, The Queen – The Prince of Wales and other Members of the Royal Family – The Lord Mayor and the City of London Corporation.

Liveryman James Armitage spoke and welcomed the guests and Wesley Kerr responded. The toast to the Glass Sellers’ Company was hailed followed by the Master addressing the gathering and finally raised a glass ‘TO GLASS’ !

The evening had sped by at a pace and now time to pass into the dark cool night air and wend our way homewards.

Filled with expectancy of our next gathering The Annual Banquet in late October at Drapers’ Hall. 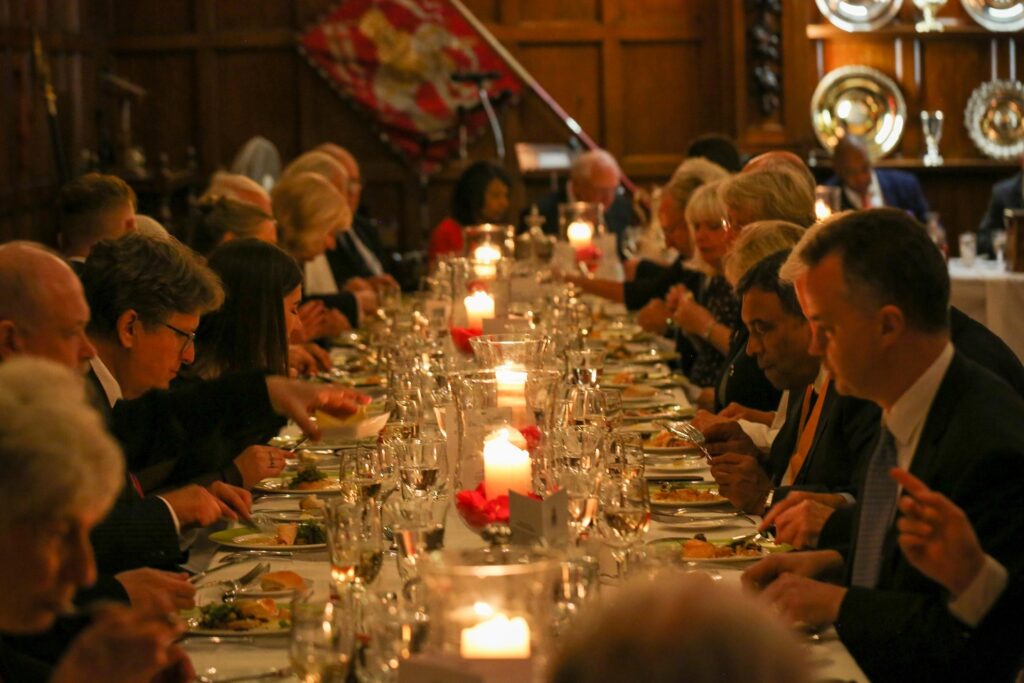