The Adventures of a Whitefriars Amber Glass Duck

It is ever surprising what arrives on the Clerk’s Office desk. The latest amusement was an email from Liveryman and Glass Collector, Mark Holford who advised that on Ebay there was an Amber, Whitefriars Duck for sale. The significant pointer was the Glass Sellers Coat of Arms on its breast. 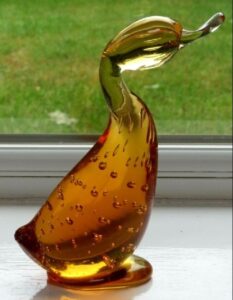 Ever inquisitive and a few google searches, enquiries with several Liverymen we found a story. The vendor bought it in an antique fair some years previously and was based in Exeter – a journey indeed.

We found one family of Liverymen that had an amber one and a clear one. 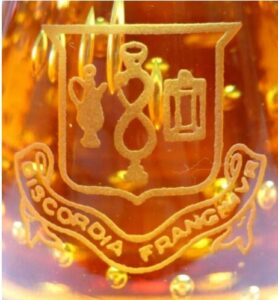 The duck is known as an “early style” duck and would have been made by Harry Dyer at the Whitefriars Glass Factory dating circa 1955-1958. The duck is the smaller of two sizes that were produced in at 5.5 inches tall, the larger being 7.5 inches.

The colour is Golden Amber and even without the crest these are quite rare in the early style and in good condition valued at about £60 – £100.00.

The story thickened when I found the information from a Company called Rare British Art Glass that specialises in Whitefriars Glass. The Whitefriars Glass Factory closed around 1980. A further interesting story of the young man Ray Annenberg who in 1953 and 16 years old – joined the Whitefriars Factory as a “spare boy” and journeyed from Apprentice to Gaffer – Master of Glass.

The Duck it would seem had been commissioned and given as the Ladies Gift at the Annual Mansion House Banquet. We are guessing Tuesday 15th October 1957 when the Master at the time was Sir Frank Henry Nixon KCMG, CB.

Interestingly, James Powell and Sons (Whitefriars Glass Ltd) in 1952 was acquired by GH Zeal Limited who in 1962 changed the company’s name back to Whitefriars Glass Ltd, specialising in freeform domestic glassware. In 1981 Caithness Glass purchased a 25 year license to use the Whitefriars name for its paperweights.

Information was also provided by Past Master and Honorary Liveryman Philip Feather. The Duck has now been added to the Company Treasures courtesy of Liveryman Mark Holford.