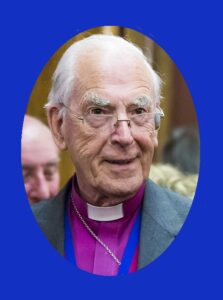 Bishop John had been the Companies Chaplain for 23 years when we celebrated his retirement from the post on 27th of November 2011 having enriched us hugely, his contribution had been incalculable. We all have so many reasons to be enormously grateful to him.

When in 1988 the Residency Canon of St Paul’s, Bishop Kenneth Woolcomb, decided that he wanted to stand down as Chaplain to the Company John was approached to see if he would be interested in taking on the role. Luckily for us all he accepted.

After coming down from Manchester University John attended Ridley Hall Theological college came Cambridge. His career in the Church had been nothing less than meteoric – after becoming Deacon in 1955 and Priest in 1956 there followed incumbencies in Ditton, Southport and Kirby. When this led to his becoming Bishop Suffragan of Stafford in 1975, he was the youngest Bishop in the Church of England. Clearly destined for great things, John went on to be Bishop of St Edmundsbury and Ipswich from 1978 -1986, and then Bishop of Chelmsford a position that he held from 1986 until his retirement in 1996. He entered the House of Lords in 1985 and has been Honorary Assistant Bishop of St Edmundsbury and Ipswich since 2008.

Perhaps however the most significant date of all is 1957, when John met and married Patricia Haikney, establishing the dream team that has served the Glass Sellers so well. Very much a family man John and Pat had three sons and seven grandchildren. Many of us will remember their son Stephen, then the Venerable Stephen Waine, Archdeacon of Dorset, (now the Dean of Chichester) giving the address at our summer service in 2000 when John was Master of the Company.

As Master Glass Seller, John was asked to preach at the United Guilds Service at St. Paul’s Cathedral the only time that anyone can recall when a serving Master has been so honoured. His sermon which, amongst other things challenged Livery Companies to look at themselves and what they were doing had an enormous impact. John’s spiritual presence sent ripples throughout the City of London extending his influence far beyond the Glass Sellers Company.

John has never imposed his Chaplaincy upon us, but we always knew that he was there if ever we needed him. Many a Master has had good reason to be grateful for this, finding John’s Episcopal arm of support when the going got rough immensely reassuring; but one Past Master put it, “Beware of getting uppity, John may prick your balloon – but so nicely that you don’t even notice it until days later!” His Graces are, of course legendary; properly reverential but hilariously funny, he relished poking gentle fun at the establishment most often politicians. Following an unusually austere budget he started off one of our dinners as follows:

Such gems were invariably met with a round of applause and much laughter.

John is ever as unassuming, and his many accomplishments are not well enough known. A gifted pianist and musician, as a Parish Priest if the organist did not show up, John would relish settling down to play the organ as well as conducting the Service. It is certain that he had had he chosen music as his career rather than the Church, he would have held all the great concert hall audiences in his thrall as he has so many congregations.

During his National Service he was one of the elite few elected to study Russian at Cambridge (‘so that we should blend in seamlessly with the student population rather than wear uniform they gave us demob suits’ John confided dryly. ‘We must have stood out like sore thumbs’)

His appointments have been numerous. He became Chairman of the Church’s Main Committee 1991 to 1996 and following his tenure as Chairman of the Council from 1995 to 2001 John was awarded a Doctorate of the University of Essex. He was appointed Clerk of the Closet to the Queen in 1989, upon relinquishing the post in 1996 he became a KCVO, a personal gift from the Queen. By convention, the Clergy do not use such titles, but there is no doubt that ‘The Right Reverend Doctor Sir John and Lady Waine’ would have a very nice ring to it! Other positions including membership of the Press Complaints Committee from 1997 to 2010, appointed Chaplain of the Order of Saint John in 1983 and he became World Prelate to the Order from 1999 to 2007. Our honorary Chaplain was a much-honoured Chaplain.

Once John’s intention to stand down as Chaplain to the Company became known, tributes flooded in from all quarters. ‘He was a great guy and should have been Archbishop of Canterbury was one’ Well, he was even nearly was. Following the retirement of Archbishop of Canterbury Robert Runcie in 1991, John as Bishop of Chelmsford was the bookies favourite. However, this is essentially a political appointment and Margaret Thatcher, having been leant by one of her former aides, offered the post instead to the Bishop of Bath and Wells, George Carey. All the media dutifully announced the decision. Not so Radio Essex, who went into mourning. Rather than report the name of the successful candidate they agonised ‘Bishop of Chelmsford NOT to be Archbishop.

‘He combined Saintliness with humour an enormous wisdom’ was another comment. Whilst all Glasses Sellers share this sentiment, as an avid fanatical, supporter of Ipswich FC it has to be said that John’s saintliness does not extend so far as Norwich City Football Club. ‘We don’t like them’ Johns says cheerfully, ‘we don’t like them at all. We have a song we sing “We never feel more like singing the blues when Ipswich win and Norwich lose!” Disgraceful, really’ sighs John happily.

John, we thank you from the bottom of our hearts for your spiritual leadership and guidance over the last 33 years. For your warmth and understanding and for reaching out to all of us but never preaching down to any of us.