A pair of identical twins were celebrating today after they scooped more than 25 A*s between them. Logan and Cumar Vasudeva, pupils at City of London School, got 22 A*s and two A’s. Including the three GCSEs they took last year, today’s results bring their total up to 27 A*s and three A’s. The brothers, from Edgware, got GCSEs in the same subjects except where one chose geography and the other history.

Logan said: “We’re good at similar subjects like maths and sciences. Sometimes we argue, but it’s ok. In maths we’re quite competitive.”

Was it any wonder that the Glass Sellers Charity Fund Trustees decided to award both boys the Abbot Scholar Award in 2012.

We caught up with Cumar recently. 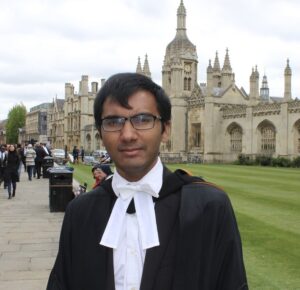 I was very grateful to receive the Abbot Scholarship in 2012 prior to starting my undergraduate Engineering degree at Cambridge University. I specialised in Electronic Engineering, graduating in 2016 after many unique experiences and making life-long friends.

Since graduation and following a Summer internship before my final year, I have been working for a technology start-up in Cambridge called UltraSoC Technologies Ltd, a company that specialises in developing and selling semiconductor IP and associated software to add debug and self-analytic capabilities to systems-on-chip.

As part of my role at the company, I worked as part of the hardware team verifying (testing) and designing semiconductor IP. After gaining some experience in my field and the company’s products, I’ve also recently started taking on a mentor role for a new graduate starter and have travelled abroad to support external contractors.

Outside of work, I am very much enjoying my time in Cambridge, having made quite a few friends. I have kept up my playing in a brass band (though this is on pause due to the current virus), a hobby that I would not have started had I not gone to Cambridge. As a member of the Churchill College Music Society playing trombone I was involved in an inaugural recording of ‘The Bird of Paradise’

I’ve also travelled to various places abroad and domestically be it to visit new countries or visit old friends.

I would again like to thank the Worshipful Company of Glass Sellers for their contribution. It meant that I could take full advantage of everything Cambridge had on offer. The Abbott Scholarship fund is a great initiative and has helped me, and I’m sure other scholars, significantly.