My Profile
Members Login
Home » News » Alone we can do so little; Together we can do so much – Tuesday 18th September 2018 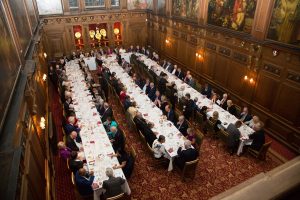 The Skinners Company, under an order issued by the Lord Mayor of the City of London on 10 April 1484 (known as the Billesdon Award), the Company ranks in sixth or seventh place (making it one of the “Great Twelve City Livery Companies”) in the order of precedence of City Livery Companies, alternating annually with the Merchant Taylors’ Company; these livery companies have borrowed Chaucer’s phrase “At sixes and sevens” to describe their rivalry over precedence – specifically which company was entitled to be 6th in order of seniority – being a source of trouble between the Skinners and the Merchant Taylors for some time in the 15th, and perhaps even 14th centuries. Both companies received their first royal charters in 1327, but the dispute erupted into lethal violence in 1484 during the Lord Mayor’s river procession, an occasion which the two guilds treated as their own private boat race. After the administration of justice to some of the offenders the then-Lord Mayor, Haberdasher Sir Robert Billesdon, mediated between the two companies at the request of their Masters, and he resolved that each company should have precedence over the other in alternate years and that each company’s Master and Wardens should be invited to dine at the other’s Hall every year.

The Glass Sellers Court adjourned from their afternoon deliberations to gather in the Old Jury Room of the Hall to greet and welcome Liveryman of the Company.  All settled down for Common Hall and for an address by the Master John Poulten. Whilst wishing to remain brief he extended warm thanks to our retiring Clerk, Lance Whitehouse who will be leaving us in October to join The Bakers Company. He further advised that both Prime Warden, Leigh Baildham and Renter Warden. Richard Katz had worked closely with him throughout the year and extended his thanks for their support. Thanks, were also extended to all the Chairman of the Company’s Committees.  The Master then made mention and sincere thanks to The Mistress, Sylvia Nicoll for all the support that she had given him during the year. The Company applauded with hearty goodwill.

The proceedings then turned to Leigh Baildham, Master Elect who will assume office at The Installation Dinner in December – he gave a brief and positive affirmation of his coming year and explained that he was very much looking forward to it with the support of Richard Katz as Prime Warden and Col. Bill Chesshyre as Renter Warden.

If the attendees had any doubt of the complexity and business behind the scenes of the Company’s affairs much was to be revealed with short presentations. 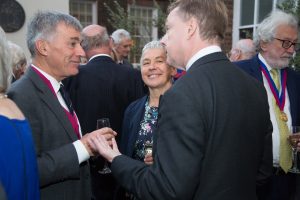 Firstly, James Armitage, Chairman of the Finance and General Purposes Committee. He briefly assured the Company that its affairs were formulating with positive conclusions.

Richard Katz, Chairman of the Glass Committee highlighted their role in engaging with the Glass Industries and all its diverse applications encouraging leading candidates to join the Fellowship of the Livery – he mentioned a reception that was being planned for December to introduce the Company to potential New Member candidates.

Next up was Michael Wallis, Chairman of The Livery Committee and responsible for Membership relations. Several events were being planned to engage members with social activities besides the Dinners. In addition to the Membership Recruitment letter a scheme was also being formulated for Livery Committee Members to individually engage with Members of The Company. This is hoped to involve and further engage members with the Company and enhance the Fellowship and Camaraderie. 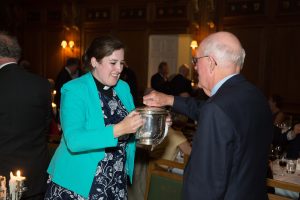 Charity Fund Chairman John Whiteman then addressed the Company. Highlighting the many aspects that the Charity Fund undertakes. He was delighted to welcome Amy Stott who advised us of the benefits the grants had given with her Youth Projects in the East End of London. They had given opportunities to young people to have a few days holiday where none had been possible before. New initiatives were being launched to support young people and help them in their transitions from school to adult life. Amy was also congratulated for her recent ordination as a Vicar.

We were then introduced to Zak Lakota-Baldwin who was reading Biological Natural Sciences at St Johns Cambridge and was in receipt of the Abbott Scholar Bursary from the Glass Sellers Charity Fund. He highlighted how he had been helped with his studies, not having to worry about how he was going to afford the course. One of which was enabling him to attend a field course in Devon.

John Whiteman concluded by emphasising the continuous stream of revenue that was needed to enable the Charity Fund to continue with its support of young people, education, glass crafts and sciences.

In conclusion Past Master Richard Lawman explained the association the Company had with the Armed Forces.  Submarine HMS Artful, RAF Leeming and Army Cadet Force, City of London and North East Sector. The company supplies prizes for best crew member annually and supplies funds for members of the Cadets to attend an Annual Summer Camp.

A very short resume indeed to absorb, but it did highlight the work of The Company after which it was time to adjourn to the roof terrace where a glass of bubbles was waiting to welcome the Company and the Guests to the more enjoyable part of the evening. 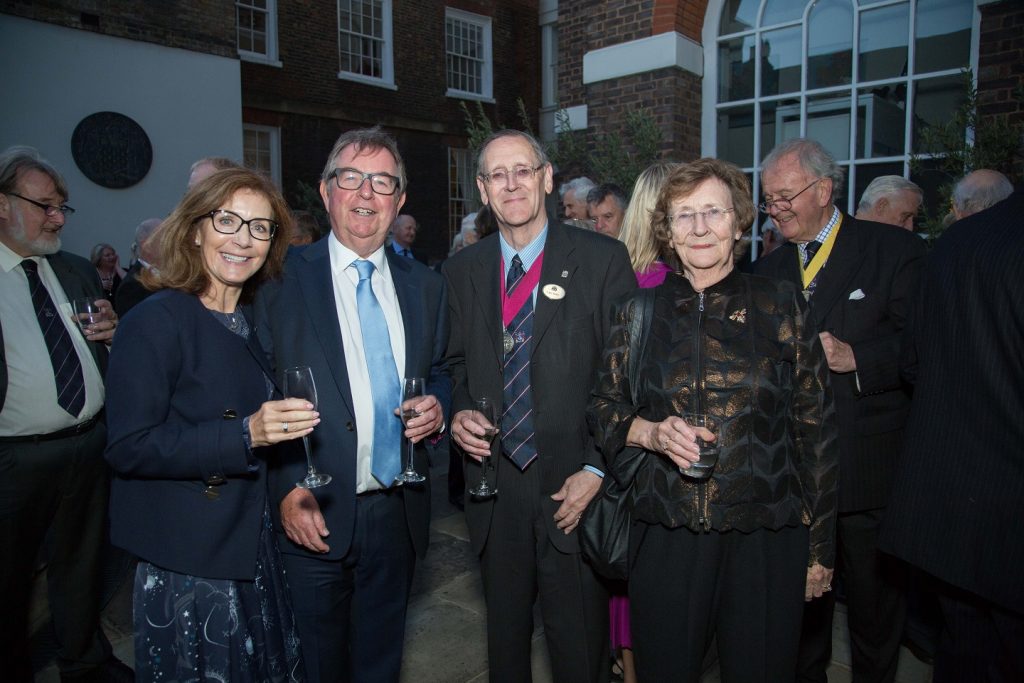 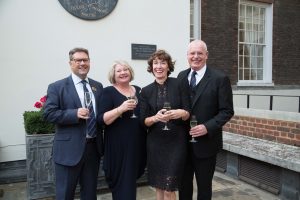 Following drinks on a balmy summer evening taken on the outside terrace the Beadle in his customary called for the throng to descend for Dinner. Places taken, and the gathering welcomed the Master and guests as is the custom. The Master welcomed everyone and announced that the evening had a theme of “Everything Essex” A matter alluded to throughout the evening by guests and members of the Company. Mayor of Havering, Councillor Dilip Patel was presented to the Company as a New liveryman to join the Fellowship. The Master also announced that Past Master Philip Feather had made his declaration as a Liveryman on 17th September 1958 and as a consequence the Court has unanimously elected him as an Honorary Freemen at its meeting that afternoon. Honorary Chaplain Rev. Canon Philip Need (from Essex) was called upon to say Grace and Dinner commenced. 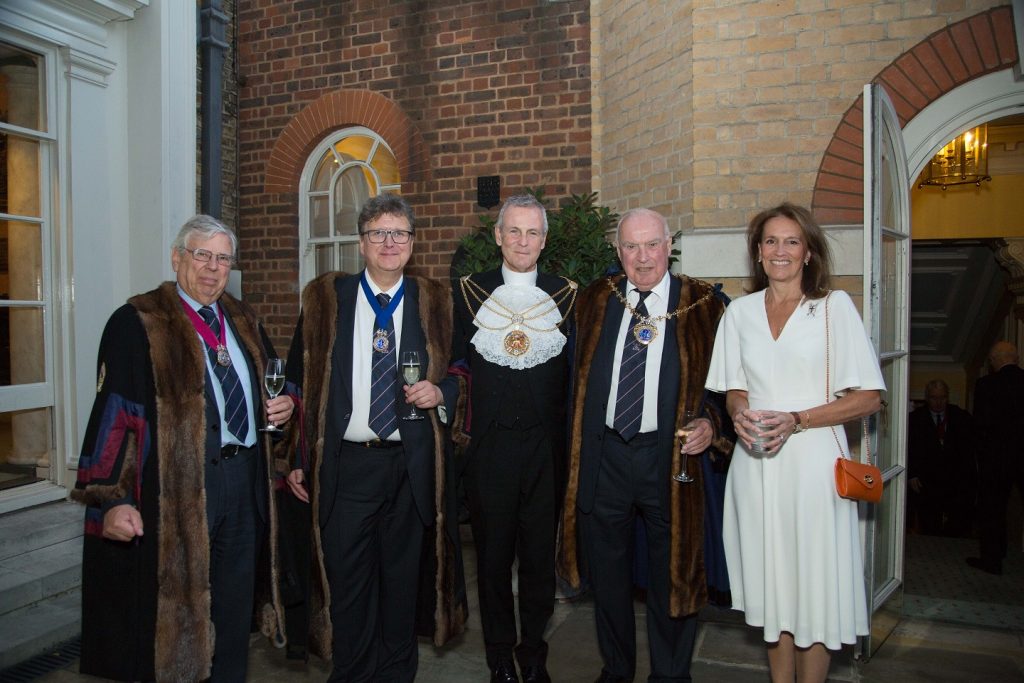 Having completed a hearty meal the gathering was called to sing Grace and that was followed by the usual rite of passing the Loving Cup. Matters progressed with toasts to The Queen, Members of the Royal Family, Lord Mayor and The City of London Corporation. 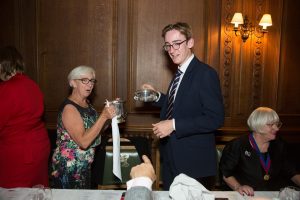 Liveryman Caroline Whiteman was called to welcome a few of the guests that included Sheriff Neil Redcliffe JP (from Essex) and his wife Emma. Our guest speaker Jonathan Douglas-Hughes OBE.DL Vice-Lieutenant of Essex and his wife and Lindsay. The visiting Masters were also Essex men. Bryan Burrough – Distiller and Colin Tiffin – Needlemaker.

All were giving a rousing “You are Most Welcome” – we rose to toast the guests. 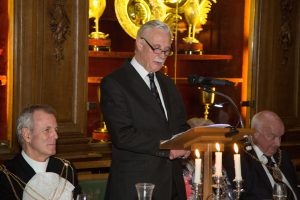 The reply was given by Jonathan Douglas- Hughes and the toast called “To the Master and Glass Sellers Company, May it flourish root and branch, forever”

The Master also presented to the Beadle a Certificate to recognise his 25 years of service to our Livery, Certainly the longest in our history and possible in the City of London. 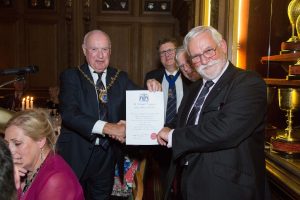 So, it was time to say farewells at the end of another vibrant and colourful evening on pomp and ceremony, fellowship and camaraderie. Some partook of a stirrup cup before venturing to awaiting transport modes wending their way home till we were called to gather once more. PAWJH0918