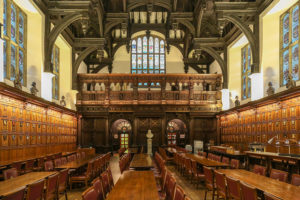 It is several years sine the Company gathered at the Middle Temple Hall situated in the heart of London overlooking the Thames. It is one of the four ancient Inns of Court. Although just moments away from Fleet Street, The Strand and Embankment, it is an oasis of calm.  The peace and tranquility of the grounds and the awe-inspiring splendour of the buildings is a world away from the hustle and bustle of the City.

Built between 1562 and 1573, the main buildings have remained virtually unchanged, with many original features surviving the Great Fire of London and both World Wars. Superb, detailed architecture, impressive oak panelling and beautiful stained glass – the work of talented craftsmen – create a breath taking and majestic atmosphere very apt for this unique occasion.

The Master, Wardens, Liverymen and Freemen were joined by guests including Masters of eight City Livery Companies. These were the Marketors, Needlemakers, Educators, Glovers, Guild of Nurses, Distillers, Architects and Turners; as well as the Senior Warden of the Company of Public Relations Practitioners.

The evening opened with an introduction by the Master Leigh Baildham briefly outlining how this year’s Ravenscroft lecture had evolved as a result of being introduced to Professor Kneebone by his Consort Alison Barnet. 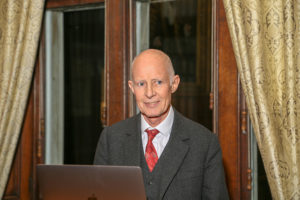 Professor Roger Kneebone is a clinician and educationalist who leads the Centre for Engagement and Simulation Science at Imperial College London and the Royal College of Music–Imperial Centre for Performance Science. His multidisciplinary research into contextualised simulation and embodied knowledge builds on his personal experience as a surgeon and a general practitioner and his interest in domains of expertise beyond medicine. Roger has built an unorthodox and creative team of clinicians, computer scientists, design engineers, social scientists, historians, artists, craftsmen and performers.

In addition to his work with Imperial scientists and clinicians, Roger collaborates with the Victoria & Albert Museum, Science Museum, Natural History Museum and the Royal College of Art. In 2017 he became the first Honorary Fellow of the City and Guilds of London Art School and is a full member of the Art Workers Guild. He is the 2018 Gresham College Visiting Professor of Medical Education. In 2019 he will become the fourteenth Royal Academy of Arts Professor of Anatomy.

Roger’s career and pedigree are well documented on the web and his numerous podcasts available to download. A particular interest, and the subject which formed the basis of his lecture, was the decline of art and craft education in the school curriculum. This meant that young people often lacked the practical skills and creativity which were so essential to succeed in other fields. 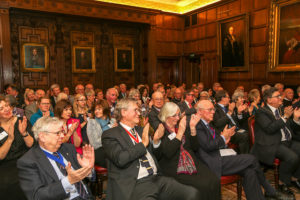 Roger’s fascinating lecture guided us through the process of collaboration between medicine and science with the arts.  In included examples from his work with craftsmen and performers in many fields to show how knowledge and insights can be shared across traditional domain boundaries. Roger talked about his collaborations with experts in glass (a leading glass engraver and a scientific glassblower) and other fields to show how professionals in apparently unrelated areas can learn from one another and enrich the practice of both

The following are some of his fascinating examples:

A senior surgeon specialising in Kidney Stones who worked closely with Glass Artist and Honorary Liveryman, Katharine Coleman. He had been unsuccessful in slicing a stone in two to study the layers and make up of the stone. Katharine applied her glass etching technique to carefully slice away layers of the stone to reveal what was required.  A perfect example of how two crafts with different applications can help each other to succeed.

Another case was a scientist working with Steve Ramsey, the resident scientific professional glass blower at Imperial College. The scientist wanted a specific instrument made of glass to support his research project. They worked together to the perfect tool.  The scientist knew what he wanted, and the glass blower created it.

Another fascinating collaboration was that of the Orthopaedic Surgeons and Stone Masons.  On the surface two very different skills but in reality, no so. Both deal with hard and soft materials in much the same way. Shaping and forming to achieve their results using similarly shaped instruments.

Finally, the bespoke tailor who demonstrated to young surgeons how a made-to-measure jacket needed to be moulded and shaped with skill to fit perfectly.  Each operation is unique and bespoke.  Standard techniques which need to be adapted to each individual and their specific situation.

Roger’s lecture gave us all food for thought and illustrated how medical students and surgeons can benefit by learning from makers, designers and performers – and vice versa.

How Livery Companies can help

In Roger’s view the lack of creative education in state schools, because of the lack or resources which resulted in a tight focus on the curriculum, is hampering young people’s life chances.  This is a subject close to his heart and on which he has spoken on several occasions, including a recent TV broadcast.  He called on Livery Companies who are connected with arts, crafts and industries to work with and support schools to continue providing this much needed aspect of education.  Careers in the arts are given less respect because they are not well remunerated.  This view needs to change because the skills gained from art and craft education make an invaluable contribution in the development of science in all its forms.

This is of course the remit of our own Glass in Society Project which not only encourages students into science education but also supports numerous craft related projects associated with glass.

Roger had the audience spellbound with his entertaining lecture.  The lecture was followed by an entertaining Q&A session.

After the Master’s thanks members and guests adjourned to the Queens Chamber for refreshments before wending their way home with minds stimulated by a fascinating lecture.