It is one of the securest locations in the country, but the Royal Navy allowed unprecedented access to HM Naval Base Clyde, welcoming hundreds of submariners, veterans, families and support workers to mark the 50th anniversary of the Continuous At Sea Deterrent (CASD).

The Royal Navy Submarine Service was entrusted with the mission of delivering and operating the country’s nuclear deterrent in 1969 and since then has successfully kept at least one ballistic submarine patrolling at sea, consecutively and continuously, every single hour of every day.

During that entire time, the submarines and crews who sail them have been based at Faslane, Helensburgh – the home of the UK Submarine Service.

To mark the Scottish Naval Base’s vital importance to the mission, HRH The Princess Royal visited Faslane to attend a parade and meet some of the men and women who have helped protect the country by maintaining the deterrent. Past Master Richard Lawman and Court Assistants, Matthew Demmon and Andy Brockett, along with their wives, attended the ceremony on behalf of the Glass Sellers.

The day began very early to accommodate the strict security held at the base.The ceremony commenced at 11am with the Princess Royal taking the salute from the Royal guard of honour and then inspecting the guard and members of the combined UK and American forces. 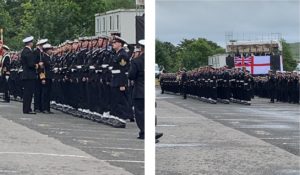 The Princess Royal inspecting the Royal Guard of Honour

Around 400 serving men and women from several platoons took part in the parade with an estimated 800 of their friends and family looking on. It is thought to be the biggest single gathering of Royal Navy submariners since the Second World War.

The Princess Royal also paid tribute to the submarine crews, industrial partners and civil servants in a formal letter that was published in the official programme for the day. 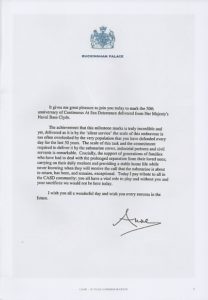 HRH also paid tribute to the many generations of families who have been incredibly supportive of their loved ones serving on HM Submarines. They have to deal with long separations with minimal, if any, contact whilst on deployment and work relentlessly to keep their daily routines and family life as normal as possible, enduring all of the above, not knowing when the submarine is about to return. This has been and remains truly exceptional.

The inspection was followed by a service from the Rev Dr Mark Davidson RN, after which, some awards were given for various number of missions and length of service for civilians working on the Clyde in support of CASD ranging from 42 – 45 years. One of the recipients, CPO WS TSM Karl Davies, was presented with a Gold Deterrent Patrol Pin for completing 20 patrols. During the inspection and throughout the proceedings, the Royal Marines Band Service played various tunes in keeping with the celebration ranging from Highland Cathedral to Rod Stewart’s Sailing. 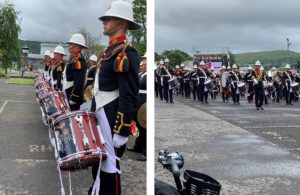 Princess Royal then took her leave and the parade marched past the guests who then followed them to the reception. 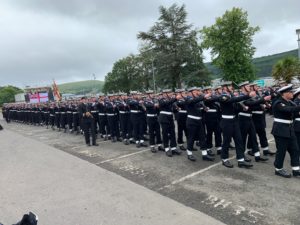 There were various stands from companies who build and support the submarines such as BAE, Babcock, QinetiQ and Serco showing the capability of their systems and controls. At the end of the reception, the Royal Marines then played Beat the Retreat performed to Lord Boyce the nominated saluting officer. Beating the Retreat brought the proceedings to an end.

It was truly a privilege to attend this momentous occasion. 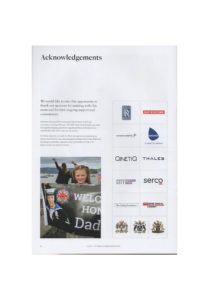