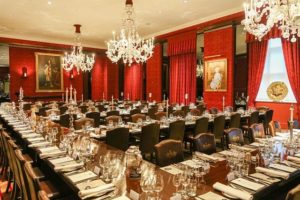 The Worshipful Company of Grocers today rank second of the Livery companies in the City of London; their earliest records date back to 1180. In 1426 the Company was granted its first Charter by Henry VI and the members purchased a family mansion and garden in Old Jewry which became the site of the first Hall completed in 1428, and nearly 600 years later is now the site of the Company’s fifth Hall.

The drinks receptions in The Piper Room, gave us our first view of the drinking glasses engraved with a camel. The camel is a continuous thread that runs through the history of the Grocers’ Company and is usually displayed facing west, travelling from the east along the spice route.

There is an apocryphal tale that the Grocers, who were once the first of The Great Twelve Livery Companies of London, were demoted to second place when, during a City procession, one of the Grocers’ Camels hired for the pageant, emitted unfortunate smells in front of Queen Elizabeth I!

Dinner was served in The Livery Hall, complete with treasures and historical artefacts. We were delighted to be joined by several guests from other liveries and the Guild of Young Freeman. 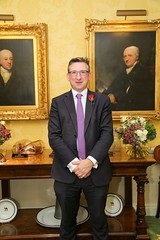 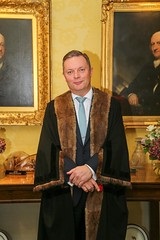 A delicious meal with wine and conversation flowing, was followed by the Loving Cup, a tradition that provides entertainment to all. On this occasion we drank from spectacular gold cups.

Joon Yoon, the Company’s Beethoven Piano Prize winner 2017 performed a selection of pieces exquisitely, the room silent except for his playing, and was given a standing ovation. 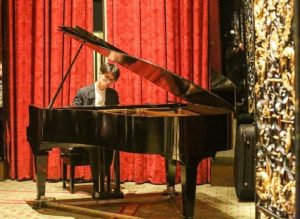 Liveryman Dave Fordham proposed a warm welcome and lively toast to our many guests. These included Anjola Adeniy, Master of The Guild of Young Freeman and a Liveryman of the Worshipful Company of Information Technologists and Sam Chadd, Deputy Clerk of The Guild of Young Freeman. Also present was Rosemary Carne, Master, Worshipful Company of Farmers and their Clerk Graham Bamford; Lt Col Marcus Appleton, Master Cook, and his Clerk, Vice Admiral Peter Wilkinson. Amanda Keaveny, wife of City of London Sheriff Vincent Keaveny also joined us along with Steve Severs, President of British Glass; Matt Gannon, Managing Director of Brewpack Ltd and Eleanor Mullen, a talented Physics graduate and granddaughter of Liveryman Ann Reed.

Our guest speaker Nicky Murdoch, MBE and her partner were welcomed along with other guests. Nicky spoke eloquently and entertainingly about her life in the Army working in Intelligence, Human Resources and Training and her involvement with Military music.

After 30 years in the Army she ‘retired’ and became Chief Executive of the St John and Red Cross Defence Medical Welfare Service (DMWS), a small military charity delivering a professional welfare service to the entire armed forces community when they are in hospital or receiving treatment in the community. Amongst other things, she now runs a consultancy advising on charity governance and executive coaching and mentoring. Nicky also suggested the Worshipful Company of Glass Sellers considers an affiliation with the Army! She will be sure to help us with that.

Leo White, Abbott Scholar 2018 spoke humorously about his introduction to university life and his involvement in the different societies and clubs at Oxford, as well as joining the rowing team and taking part in debates. He expressed a real warmth in his gratitude for the benefits of being an Abbott Scholar.

Dinner concluded with the stirrup cup before another excellent evening of fellowship and fun came to a close.