On Tuesday 10th December 2019 members of The Worshipful Company of Glass Sellers with their guests gathered in the Court Room of Stationers Hall in Ave Maria Lane, London to celebrate the successful term of the retiring Master, Leigh Baildham, and to witness the installation of the new Master Richard Katz 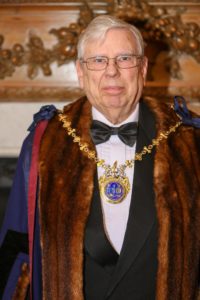 . Bill Chesshyre was nominated Prime Warden in his absence and Barbara Beadman was installed as Renter Warden. Eleven new Freemen were inducted into the Livery and one Liveryman was admitted to full Livery. Glass Artisan Allister Malcolm was made an Honorary Freeman and presented the Master with a Glass Piece 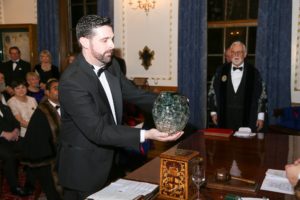 that would be used to raise funds for the Charity Fund. After concluding its business, the Court adjourned for the Reception and Dinner.

Why do Liverymen, dressed in their finery, so love queuing with their equally attired partners on staircases? On the previous Friday, my wife and I had shuffled slowly up three long flights of staircases from the cloakroom in the basement of the Guildhall in order to be welcomed by the Master at the top of the final staircase at the start of his Annual Banquet. Mercifully at Stationers Hall the staircase is only one and considerably shorter. Arriving at the top in the entrance to a narrow room we were greeted by the splendid Beadle, Anthony Parker, who scratched his forehead, tugged at his trimmed beard and then confessed that he could not remember our names. In stentorian tones, which would propel any unfortunate into the Speaker’s Chair in the House of Commons, we were introduced to the newly installed Master, Richard Katz and his charming wife, Jaine. 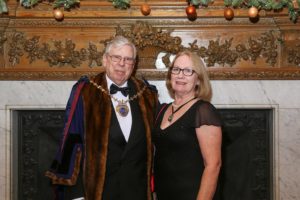 Hands shaken, congratulations proffered, we followed the flow into a large reception room where we achieved the reward of queuing – trays offering glasses of champagne (or orange juice if that was your preference). Propelled by the impatient, thirsting queue behind us into the large ornate room, lined with oil portraits of Masters of a bygone age, we sipped at our champagne, admired the finery of evening dresses and black ties and engaged in happy conversation with friends.

Thirty minutes later, we were summoned by the Beadle to retrace our steps down the staircase into the glorious, majestic, medieval like Dining Hall 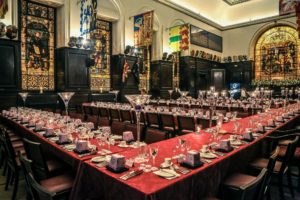 with its oak paneled walls, supporting a remarkable hammer beamed ceiling. Dinner was about to be served. Five spurs of tables protruded from the long top table, each sumptuously adorned with tall glass candle holders, napkins, silverware and wine glasses (four per place – serious business lay ahead!) and small, pretty boxes of panettone. Seats found, introductions made, or acquaintances renewed we stood patiently, engaged in quiet conversation, waiting to partake in the only duty of the evening – to slow hand clap the procession of the Top Table to their appointed places. This procedure safely accomplished; the eleven newly admitted Freemen were invited to stand so that we knew who they were as well as the new Liverymen and Honorary Freeman. All were heartily welcomed to the Company.

Grace from the Laudi Spirituali, 1545 was followed by a highly amusing, original and slightly irreverent extension sung by the Master’s Chaplain, The Reverend Canon Philip Need which set the tone of the evening and who was rewarded by chuckles and hand-claps. We were invited to sit down. The dinner began. 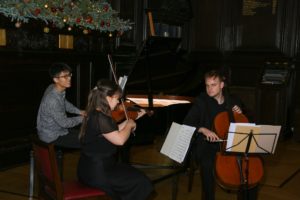 A recharge of wine was necessary and obligingly given at this stage of the proceedings as we were serenaded by the talented pianist Joon Yoon,  the winner of the Glass Sellers’ Company’s Beethoven Piano Prize 2019 competition and fellow musicians Ben Tarlton(Cello) and Juliette Roos(Violin) who played pieces by Astor Piazolla and then we were and encouraged to sing “White Christmas” and “Hark the Herald Angels”.

A savoury of Colston Bassett Dairy & Apple on toasted crumpet, followed by Christmas Pudding; Christmas Pudding Ice Cream, Oranges in Caramelised Oranges and Rum Sauce, designed unsuccessfully to sober us up sufficiently to concentrate on speeches, its success negated by an Austrian Muscat Ottonel Late Harvest 2016. 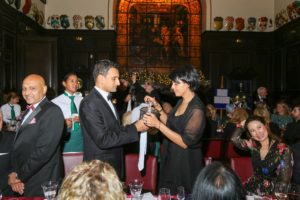 In awe, we awaited our turn to drink from the Loving Cup, desperately trying to remember the procedure as in rapt attention we watched the Loving Cup pass ceremoniously from one upright diner to the next. The reward for an ungainly if enjoyable performance was a welcome glass of port.

The Beadle then prayed “silence” for the Master to propose several Loyal Toasts. Duly given, the Renter Warden Barbara Beadman welcomed the many guests and then proposed the Health of the principal guest, Liveryman Dave Dalton. the chief executive of British Glass 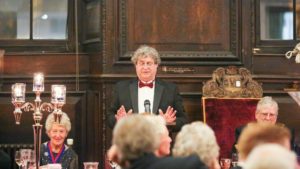 The Master then concluded the speeches with a delightfully amusing toast “To Glass” and presented the Past Master and the Clerk with personal gifts. Memories of the actual content of his speech were somewhat befuddled by this time, but it was very enjoyable. And it had the virtue of being the last speech of the evening. 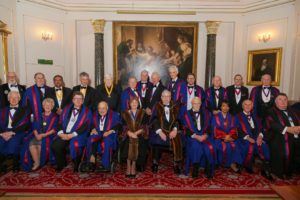 At the command of “All rise” we all stood and slow hand clapped the Top Table out of the Dining Hall. The Stirrup Cup awaited us, to fortify us for our journeys to home.

Encouragement for Decarbonisation of the Glassmaking Sector