A night of firsts indeed. For the Company our first visit to the Fishmongers Hall and our first gathering for 2018.

The hall was destroyed by the Great Fire in 1666, rebuilt twice thereafter and then devastated by bombs during World War II but restored. Restoration was prolonged due to materials shortages during and after the war years but was completed by 1954. With a history of over 700 years and ranking number four in the order of precedence the Fishmonger’s Hall commands a high place in the City and especially for its prime location on the banks of the River Thames offering excellent views across the Thames to the South Banks recent developments. Inside one can absorb the wonders and grandeur of the building, sparkling crystal chandeliers lit with live wax candles (serviced by our own Court Assistant David Wilkinson). As you drift through the rooms there may be a chance to see the famous Pietro Annigoni’s portrait of HM Queen Elizabeth commissioned by the company in 1955.

Master John Poulten, Prime Warden Leigh Baildham and Renter Warden Richard Katz received attendees and a reception was held where Prosecco was served. The Beadle called Dinner and the Company traversed to the Banqueting Hall. With a good attendance the long tables filled the hall and were decked with candelabras complimenting the vaulted ceiling.

The Master welcomed all and expounded on the 100th Anniversary of the RAF and that in addition to our affiliation with the Navy and HMS Artful we would also be forging an affiliation with the RAF and RAF Leeming located near Leeming in North Yorkshire. As with HMS Artful the Company would be presenting The Glass Sellers’ Tankard to the serving member adjudged to have contributed most, above their professional duties, to the well-being and morale of the station. The first recipient, Flight Lieutenant Gemma Bean was presented with The Glass Sellers’ Tankard 2018.

The Honorary Chaplain said grace and our Fare was served. 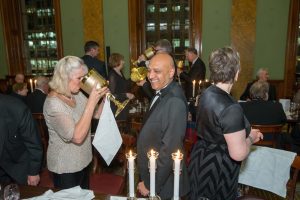 We sang Grace and passed the Loving Cup. The Master proposed the usual toasts. Assistant to the Court, Liveryman David Wilkinson welcomed visiting Masters, Clerks and Guests and proposed the Toast “The Guests”. The response was delivered by Wing Commander Andrew Coe B Sc (Hons) MA RAF.  who outlined the role of RAF Leeming, its diversity and support around the World. 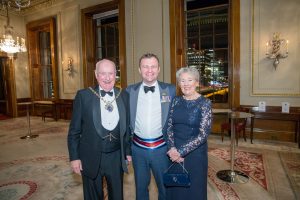 The Master closed the evening with the Toast to Glass, may it flourish root and branch.

The gathering retired for a stirrup cup and ventured into the evening air to make their way home till we gather once again in June.