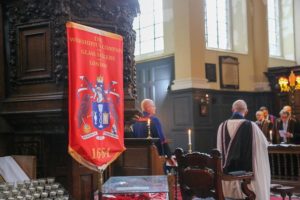 its profusion of windows and has long been associated with the Worshipful Company of Glass Sellers od London as well as several other Livery companies.

The service was conducted by Father Tim Handley SSC and a thought-provoking sermon by the Honorary Chaplain, Reverend Canon Phillip Need. Readings were given by Prime Warden, Richard Katz and The Master, Leigh Baildham. The Company was thanked by Father Tim for the cleaning and refurbishment of the magnificent Glass Sellers chandelier which adorns the aisle and ensured all could see the order of service. 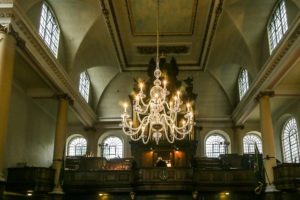 The choir were in excellent voice accompanied by our own organist Past Master and former Lord Mayor of London Sir Andrew Parmley and included the anthem, Teach me my God and King -Andrew Campling (commissioned by the Glass Sellers in 2014.  The rousing final hymn better known as the U.S. Battle Hymn of the Republic sent us all out into a wet evening for the journey to Apothecaries Hall for dinner. 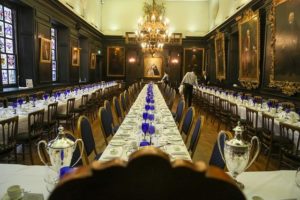 Joined by further members and guests, a 128 people attended the drinks reception and took their seats in the impressive Great Hall. Three new Liveryman were introduced to the Company. Martin John Gibbons, David Charles Fordham and Frazer Charles Campbell. The Company were also advised of the declarations made by new Honorary Freeman, James MacDonald Fiddes and two new Freeman, Matthew Tottle and Mark Lofthouse.

Apothecaries’ Hall is the oldest extant Livery Hall in the City of London, originally purchased by the company in 1632 from the Dominican Priory of Black Friars it was destroyed in the Great Fire of London. The first-floor structure and arrangement of the Great Hall, Court Room and Parlour remains as rebuilt between 1668 and 1670. The building and Great Hall being adorned with many fine works of art.

A delicious four course meal accompanied by excellent English and South African wines was served and all participated in the passing of the Loving Cup, always an interesting experience for those unfamiliar with the workings of this long-held tradition. 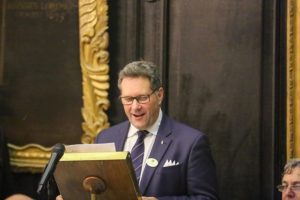 Dinner was followed by a piano recital performed by Ms Zhu Sun and David Soo, the Company’s, Glass Sellers, Beethoven Piano Prize Winner 2018. David performed some impromptu jazz  both performances were thoroughly enjoyed especially as a taster for the Glass Sellers Annual Concert 9th October 2019, where they will be performing. 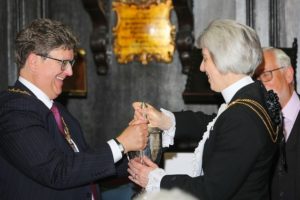 The Master then awarded a glass tankard, which is presented annually to the crew member of HMS Artful adjudged to ‘have contributed most, outside his professional duties, to the well-being and morale of the crew’ This year the tankard was presented to POMA Joseph Dash. Unfortunately for operational reasons he was unable to be present and it was accepted on his behalf by Lt Commander Nicholas Stone the Executive Officer of HMS Artful. 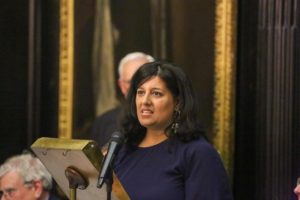 The response on behalf of the guests was given by Kulvinder Kaur Johal a primary school teacher and now Regional Mentor and Fellow of the Primary Science Teaching Trust. One of her previous schools had received support from the Worshipful Company of Glass Sellers Charity Fund, Glass in Society Project enabling them to provide science equipment  at a time when even basic supplies such as pens, pencils and paper were in short supply due to cuts to the school budget. She gave examples of many children benefiting from the equipment received, some of whom had never seen or used magnifying equipment before.

Dinner concluded with the Master leading the way to the adjoining Parlour for a stirrup cup before the throng wended their way into the late evening air and headed home. 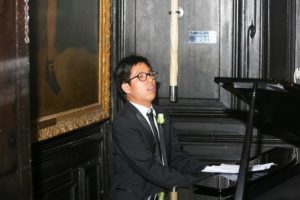