Members and Friends of the Glass Sellers gathered on a rather steamy hot Summers evening in July at the Butchers Hook & Cleaver in Smithfield to hear the spine chilling stories of the area. The famous St Bartholomew Fair held within the precincts of the Priory of St Bartholomew West Smithfield on 24th August from 1133 to 1855.

The fair went all the way back to 1133, when Henry I issued the licence for it to a former court entertainer, Rahere, founder of the priory at Smithfield which eventually became St Bartholomew’s Hospital. Prior Rahere liked to go to the fair himself and do some juggling, and his foundation drew useful income from it. Held on the open space of Smithfield, just outside the city walls, starting on the eve of the feast day of St Bartholomew in August, it grew into the country’s largest cloth fair and London’s biggest annual jamboree. From 1604 it was controlled by the City of London and opened every year by the Lord Mayor.

The fair’s loutishness, drunkenness and vulgarity, however, aroused growing middle-class disapproval. It was attracting too many thieves and muggers, and the City imposed increasingly stringent restrictions. By the 1840s it was a shadow of its old self and it made its last bow in 1855.

Smithfield is a locality in the ward of Farringdon Without situated at the City of London’s northwest in Central London. The principal street of the area is West Smithfield. 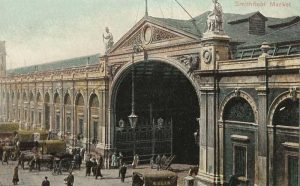 Several City institutions are in the area, such as St Bartholomew’s Hospital, the Charterhouse, and Livery Halls, including those of the Butchers’ and Haberdashers’ Companies. Smithfield’s meat market dates from the 10th century and is now London’s only remaining wholesale market in continuous operation since medieval times. The area also contains London’s oldest surviving church, St Bartholomew-the-Great, founded in 1123 AD.

Smithfield has borne witness to many executions of heretics and political rebels over the centuries, including Scottish patriot Sir William Wallace, and Wat Tyler, leader of the Peasants’ Revolt, among many other religious reformers and dissenters.

Smithfield Market, a Grade II listed-covered market building, was designed by Victorian architect Sir Horace Jones in the second half of the 19th century and is the dominant architectural feature of the area. Some of its original market premises fell into disuse in the late 20th century and faced the prospect of demolition. The Corporation of London’s public enquiry in 2012 drew widespread support for an urban regeneration plan intent upon preserving Smithfield’s historical identity.

Our address was delivered by registered guide Rhona Levene who graphically guided us through the area and told stories of treason and defined in some detail the process of being Hung Drawn and Quartered!

Indeed, a night barely touching the full extent of many stories associated with one of the most historic districts of The City.

Deterred not by these gruesome descriptions our party went onto devouring their choices of succulent and hearty Steak and London Pride Pies, Billingsgate Pie or Vegetable Pie with traditional liquor, Fries or Mash amply washed down with red and white wine.

The focus of the evening was not lost with camaraderie and jolly times. A raffle was drawn raising funds for the Company’s Charity Fund.

Whilst some drifted after the allotted finishing time others lingered to that bewitching hour when closing time arrives.

Drifting into the balmy night air and wandering home from a thankfully well-lit area with ghosts and ghouls lurking in the shadows.