Glass Artists at The Championships, Wimbledon

In October 2017 the Clerk was approached by The All England Lawn Tennis Club at Wimbledon asking if the Glass Sellers’ Company could help them find a glass artist to be their 2018 Championships Artist. On the recommendation of Renter Warden, Richard Katz, liveryman and glass collector, Mark Holford, was volunteered to help. 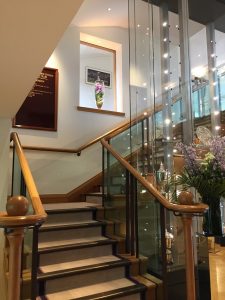 He visited the Club in November and was taken on a tour of the Clubhouse during which he was shown the facilities including the Royal Box. The reason for this was because the Club wishes to commission two pieces of glass art that will occupy a prestigious and highly visible position. They are to be placed in vitrines which are 1.6m high and located on the main staircase, the backs of which open onto the two passages leading to the Royal Box. [illustrated in the photo – where the vase is]. This spectacular location means that the works will be seen by all the players and stars who pass through the Club. This is an outstanding opportunity for the chosen artist and for British glass art in general.

Mark agreed with the Club the following process:

Just over 50% of the artists submitted entries by the 9th February deadline. This was a surprise because many of the artists normally produce abstract work, but they rose to the challenge. Mark had in the meanwhile asked Honorary Liveryman Katharine Coleman MBE to assist in reducing the list. Katharine and Mark, with three representatives of the Club created a long list of eight which was then shown to the Club Chairman Philip Brook and Chief Executive Richard Lewis. They selected the following three sets of finalists:

The three proposals are very different and the final choice is likely to be difficult. The three finalists are now drawing up detailed proposals which they will present in person to the Club in mid-April. The selected Championships Artist for 2018 will be announced at Wimbledon’s Spring Press Conference on 1st May. After this the winner will attend The Championships and has until the end of the year to produce the work. So you will have to wait until 2019 to see the fruits of the labour of these Wimbledon winners.