A long journey with a short ending.

It seemed implausible at the time, when we were in December 2019 that the World Health Organisation had been informed of a cluster of cases of pneumonia of unknown cause detected in Wuhan City, Hubei Province, China would affect us here in the United Kingdom. We had no idea that our everyday lives would be changed.

Over the many years, the Worshipful Company of Glass Sellers of London has continuously exercised its ability to being Relevant to the Industry that it represents. Radical in the way it approaches anything that it faces. Reasonable in the way it deals with and ever Resilient with an ultimate resolve.

So, it was. As we continued to adapt to lockdown and the inability to exercise our fellowship and camaraderie, we learned new technology and adapted to the wonders of zoom. In June. 2021 at last a chance to meet, resume and evolve a ‘new normal’

The Clerk set to find a suitable alternative to hold this prestigious event. Having searched many of the beautiful Livery Company Halls and other venues available in this great City of London it was decided that we would go to Draper’s Hall. Six weeks to prepare. Some of the foundations had already been laid. The band had been booked. The Masters’ gift ordered. All that remained was to organise the menu, the wines and to invite the Company and guests to attend.

Members of the Company had been advised of the date earlier in the year, the final confirmation, the event would take place. The calling notice had not been sent out till late September. Then two and half weeks before the event we were still sitting on the edge, trying to ascertain if people would come out and attend. With barely 38 booked, more communications were sent out. In true Glass Sellers spirit, the Membership rallied and within the space of four days our numbers crept over 100. Finally ending at 170. Twenty-eight less than 2019.

Company Guests and Members Guests totalled Nine Masters of other Company’s. The recently elected Sheriff, Alderman Nicholas Lyons and his wife Felicity. The Masters Guest Speaker, Sir Peter Bottomley MP and Lady Virginia Bottomley, Baroness of Nettlestone, The Secretary of the Contemporary Glass Society, Pam Reekie and her husband Glass Artist David Reekie. The Secretary of the Guild of Glass Engravers, Julia Ravenscroft and Alan J. Poole a promoter of glass throughout the United Kingdom as well as City Guide, Rhona Levene.

Our day arrived, flowers festooned the tables, the Beadle collected a cartload of the Company’s treasures from the vaults – our Silver and Gold also adorned the tables creating and complimenting the grandeur of the Draper’s Hall, making it sparkle and twinkle in the candlelight. 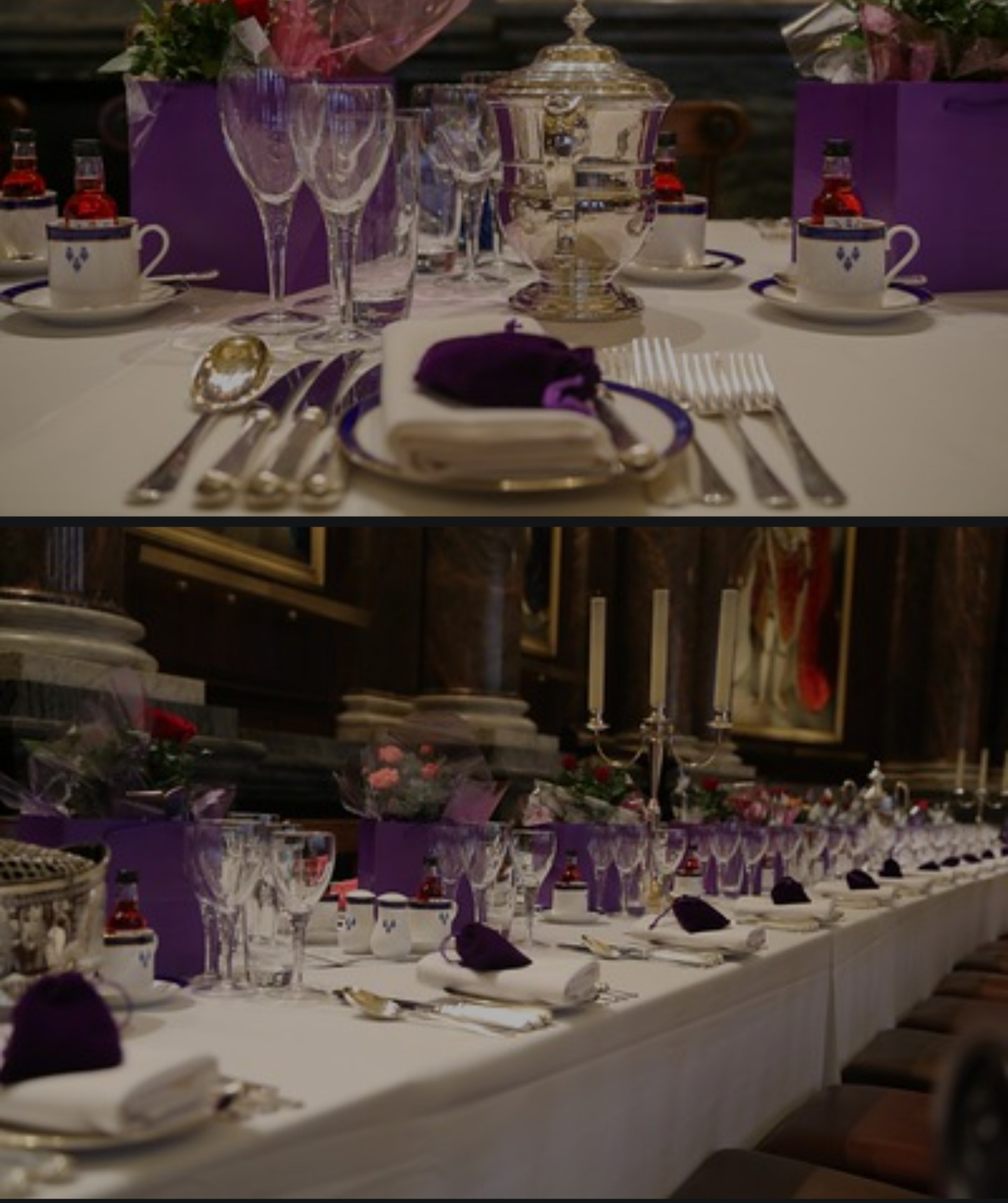 Our arrival was hailed by the attendance of the City of London and NE Sector Army Cadets Force who provided our stair guard. Guests also arrived, from our affiliates, HMS Artful and RAF Leeming as well as many guests of other Liverymen.

The Beadle summoned us up the stairs to be greeted by the Master and Wardens, after which they collected glasses of bubbling Cava Brut, and followed through into the Court Drawing Room, dominated by the crystal chandeliers and paintings and spilling over into the Court Dining Room. A fanfare announced the arrival of Sheriff, Alderman Nicholas Lyons and his wife Felicity and were greeted by the Master and Wardens.

The Beadle called for dinner. All made their way to the Great Hall. Then another fanfare, announcing the arrival of the Master and principal guests who were clapped to their places while the band played “Happy Days are Here Again”. Our newly appointed Chaplain the Reverend Stephen Baxter was called to say Grace.

The Master welcomed all and thanked the Cadets for their attendance and providing the stair guard. The attending troupe were presented with their new colours that hitherto the Company had contributed to, but to date had not seen. They were paraded through the dining hall.

The assembled throng sat; wine was poured. A beautiful Viognier from Languedoc in France, dinner began. Our starter – Beetroot cured Salmon with Dill Cucumbers and Salted Quail’s Eggs. Music of a light-hearted nature played in the background whilst all chatted and renewed friendships, catching up on events of the past year, and more. As we ventured forth, the main course was served: Draper’s Beef Wellington, complimented with a beautiful Malbec, from Patagonia, Argentina. Then onto a Double Baked Cheese Souffle, followed by, Plum Clafoutis with Crème Fraiche Ice Cream. This was served with Mavrodaphni of Patra, Kourtaki, a Greek Red Dessert wine.

The evening passed and time for Grace – we sang out our hearts in joy. The traditional, but adapted passing of the Loving Cup, practiced with miniatures of Damson Gin, stamped with the Company Coat of Arms.

Toasts were called: The Queen – The Prince of Wales, the Duchess of Cornwall, and other Members of the Royal Family – The Lord Mayor and the City of London Corporation.

Presentations were then made to.

As coffee was served one of the bandsmen struggled in with a large Tuba case from which he extracted his hunting horn – and so the Post Horn Gallop was sounded and played echoing calls from one horn to another with added comedy, musicianship, and the art of circular breathing. The room erupted with applause as the final breath was taken.

Onto some formality where Prime Warden, Barbara Beadman added a little humour to welcoming the long list of guests. With the stopwatch ticking fast, Barbara welcomed guests of the Master, past fellow students of Cambridge, Livery Company Master’s and their Clerks, guests of Members from as far afield as Malta and Sri Lanka and guests from Glass Art Organisations. All of whom were ‘most welcome’ The Company rose to drink a ‘Hearty Glass Sellers Welcome’

The response delivered by Sir Peter Bottomley MP who regaled us with some stories of student days past and a long friendship with the Master. The Company rose once more as he called the toast ‘The Master and the Worshipful Company of Glass Sellers of London’

The Master stood and summed up the evening expressing thanks to the Clerk, Assistant Clerk, Chef and Catering Staff and of course the Royal Marine Ensemble. Thanks also to the assembled members and guests who had contributed to the success of the evening. Then a call to stand and raise a glass “TO GLASS !”

Our short journey was at an end, and we gathered flowers, crystal angels (Master’s Gift) and our coats to venture into the mild autumnal air, to make our way home and talk of the memories of the evening and how nice it had been being out with friends once more.

Opportunities for Glass at Cockpit Arts