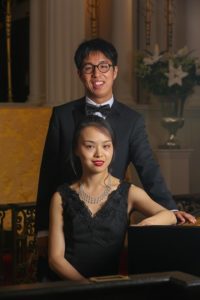 Thankfully with a break in the autumnal weather with lovely blue skies and a sunny day, though a little chilly when we gathered once again at the Grosvenor Chapel, in the heart of Mayfair, for our Annual Concert. The Artist this year was to be the Guildhall School of Music, Glass Sellers Beethoven Piano Prize Winner 2018, David Soo and joined by Zhu Sun a Chinese pianist also studying at the school.

As the sun set and the evening drew in, the twinkling candle lights in the Chapel added to the atmosphere that was filled with expectation and excitement. The Baby Grand took centre of the Chapel aisle, with lid open and ready for the evening’s performance

We were delighted to welcome nine Masters of other Livery Companies, Chairman, Conductor and secretary of the Australian Music Foundation as well as Glass Sellers and friends for this year’s concert.

As people settled into their seats the Master took the opportunity to welcome everybody and advised that the monies collected this evening would be going to the Company’s Charitable efforts supporting young people doing projects relating to Glass. Finally, he introduced David Soo to take stage and to start the evening.

David took the evening in his stride and introduced the first piece that he was to play. The Beethoven Sonata in A flat major Opus 110. The Sonata had been published in 1821 and is the centre of a group of 3 he wrote between 1820 and 1822 and the 31st of his published piano sonatas. The work is in three movements. The moderato first movement in Sonata form marked con amabilita, is followed by a fast scherzo. The finale comprises a slow recitative and arioso dolente a fugue, a return of the arioso lament and a second fugue that builds up to an affirmative conclusion. This indeed is and was a challenging piece and undertaken with the artistry required. 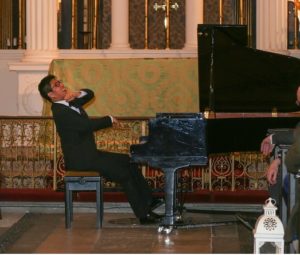 Next was the Prokofiev Sonata in A Major op 82. This had been written in 1940 and the first of Three War Sonatas. It had four movements and attempted to depict the horrors of war and all its associations with conflict and of course the horrors of the holocaust. The piece was indeed intense and very moving, and the interpretation exhibited with the deep emotion that it deserved.

Now time for the interval. An opportunity to catch up with friends and meet new ones over a glass of wine.

In the meantime, our second player Zhu Sun was preparing to join David for a four-hand piece (Piano Duet) The piece to be performed was a medley of several pieces including – Bach’s Sheep May Safely Graze, Ravel’s ’Laideronnette, impératrice des pagodes’, Faure’s Berceuse from the Dolly Suite and Dvorak’s 6th Slavonic Dance. The duet had the audience spell bound. and finished with the Slavonic Dance to applause and hails of ‘encore’ Our artistes duly obliged. 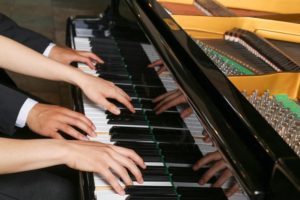 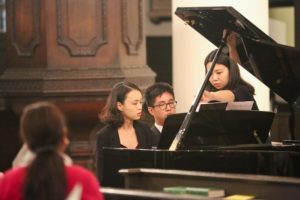 David returned to the Piano alone to play the next piece. Liszt- Petrarch Sonnet no. 104. Inspired by the poetry of Italian Renaissance poet Francesco Petrarca, and was concerned with love, in one form or another. It is a meditation on love itself and specifically the poet’s love for Laura de Noves. It is a piece both dramatic and probably the most passionate of the set of three. It captured the audience’s imagination and especially the complexity of the musical composition and hand movements in performing this piece. 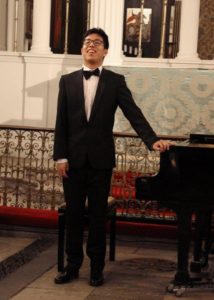 We moved onto the last piece. Liszt- Rhapsodie Espagnole S.254. This had been written in 1858 and expresses Liszt’s love of Spain that he acquired during his tour in 1845. It is very suggestive of traditional Spanish music. It takes about 11-14 minutes to play and contains extreme technical challenges, including rapid chords and octaves. It is probably one of Liszt’s best-known compositions. To say this was a challenging piece would have to be seen to truly appreciate its complexity. David finished to a rousing standing ovation of appreciation and delight from the audience. With several bows and returns to the stage he suddenly announced as an encore ‘And now some Jazz’. A complete contrast to the evenings progress and further demonstrated his dexterity and musicianship.

The evening ended with rousing applause and sincere thanks expressed by the Master and again endorsed by the audience. 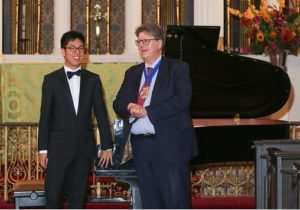 As people left the Chapel, they were already expressing enthusiasm at attending next years concert and this will be planned after the Guildhall School of Music, Glass Sellers Beethoven Piano Prize Competition 2019.

This will be held on Thursday 28th November 2019 at the Guildhall School of Music, Milton Court Concert Hall, EC2Y 8DT at 14.00 hours and is a Free