The Master, John Poulten and The Worshipful Company of Glass Sellers of London send hearty good wishes to Liveryman Nicholas Gandy who has been invited by the Bishop of Peterborough to join the College of Canons of Peterborough Cathedral. 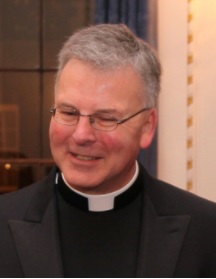 The appointment is with effect from 1st April 2018, so he is now listed as ‘The Revd Canon Nicholas Gandy OGS’.

Before ordination in 1988, Nicholas was a research microbiologist and a teacher.  He has been Vicar of  Brackley since 2003 having previously been Vicar of St. Peter’s, Didcot, Oxfordshire.  Nicholas is a life-professed member of the Oratory of the Good Shepherd (OGS), a dispersed Anglican Religious Community with brothers in Australia, South Africa, North America, Mexico and Europe.

He will be installed as an Honorary Canon of Peterborough Cathedral at Evensong on Thursday 8th November 2018 at 5.30pm.