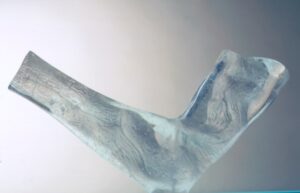 Max Jacquard won the Worshipful Company of Glass Sellers of London Arts and Crafts Award in 2001 and has gone on to have a much respected career in Glass Artistry. He joined us one evening an talked about his work.

Born on the edge of London in 1964 Max Jacquard trained briefly as a furniture designer before switching to the relative freedom of ceramics and glass on the course at High Wycombe, liberally run in the late eighties by Sam Herman. Jacquard’s practice began by producing ranges of loosely functional vessel forms and lit objects for galleries whilst working on larger works to commission. Over time his work has focused on glass sculpture and large-scale architectural projects. He has established a strong reputation for innovation both in technique and concept that makes his work distinctive and unique amongst UK Glass Artists. Max’s style combines personal stories with diverse cultural references including archaeology, alchemy, science, and craft traditions. Kiln forming is employed as the central technique, but the results are extensively cold worked and combined with other media in a rich sculptural language. 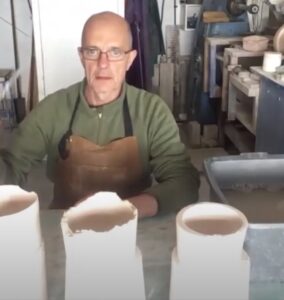 Jacquard is well known for working collaboratively and organising group exhibitions and events. In 1998 he co-founded the artists group New London Glass and was pivotal in the organisation of exhibitions such as Sub Urban Glass at Gloucester Road Underground Station. In 2002 his work in the exhibited in Solid Air at the Crafts Council explored an new area of sound and light which integrated large-scale hanging glass figures in a sensory experience. Since this time his work has been acquired by the V&A Museum, The Shipley Museum of Applied Arts and the MAVA Museum in Alcorcon, Madrid. Expanding on techniques in fragile castings, in 2006 he completed a series of crumpled tissues in clear crystal titled My Lost Loves for which he was awarded first prize in the UK Glass Biennale.
Max works from his spacious converted barn studio in Maidstone, Kent where he takes on a range of challenging sculptural and architectural projects and exhibits regularly. He is continually involved in education, leading short courses across the UK and Europe including The Glass Hub, Frome, Somerset and Bildwerk, Fraunau, Germany.