Bubbles were flowing once more as August was ending. The Master, Wardens and Members of the Court and Livery gathered for a third time since the isolation periods of the previous 16 months or more had expired in late June 2021.

For our gathering we returned to the historic Waterman’s Hall where we were in September 2019 also for a Luncheon. The Hall was purpose built in 1780 though the Company of Watermen and Lightermen of the River Thames were founded in 1514. The 18th Century Hall sited in St Mary at Hill a stone’s throw from the Tower of London nestles quietly and elegantly and suits well for medium sized gatherings.

Our caterer was Mark Grove of The Cook and The Butler who as usual arranged for the room to be laid in traditional style. We started with bubbles served in the Court Room dominated by the magnificent Gold Leafed Master’s Chair. Master Bill Chesshyre took no coaxing in trying it out. 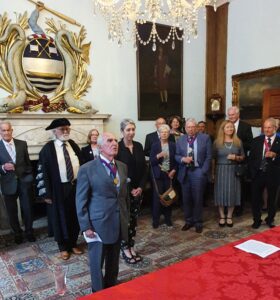 As Members arrived and heads counted, the Beadle called to Order and announced to the group to receive a new Freeman to the Company. Led by Past Master, Brian Rawles, Dr Helen Beadman, daughter of Prime Warden Barbara Beadman processed and stood before the Master to make her declaration to become a Freeman of the Company.

Having made her declaration a rousing applause and congratulations hailed, and the Beadle called for places to be taken in the Freeman’s Room as Luncheon was to be served.

The tables were garnished with pots of flowering cyclamen and a little goodie parcel for each attendee creating a colourful and light-hearted atmosphere of fun and joviality. The Clerk said Grace and the Master then welcomed the throng to our gathering and exclaimed happiness that so many had come. A clear indication that we were on the road to a new beginning and founding a new normal of activities after the dreaded Pandemic that had blighted out lives.

We chatted and laughed as the time passed by and in a wink of an eye the dessert was served, Roasted Conference Pear, Green Figs, Ginger Shortbread Biscuit, Winter Spiced Ice Cream to be followed by Coffee and Chocolates accompanied with Bario Port.

The Beadle called and the Master proposed the Toast to The Queen!

Happily, fed and enjoying the afternoon the Clerk invited Beadle Tony Parker to talk about the Waterman’s Company as he was also Beadle to them. He chatted through their history and traditions and their special role on the River Thames. The Company’s principal activity is that of a working guild, providing services to its Freemen, facilitating an apprenticeship scheme, acting as trustee for its charities and participating in the traditions of the City of London. The Company has over 390 Craft Owning Freemen and some 500 Journeymen Freemen who have completed a five-year apprenticeship to become qualified Watermen and/or Lightermen (now termed the Boat Master’s Licence).

As coffee cups emptied and the last drops of port were drained from the decanters the afternoon was turning towards evening and time for us all to wend our ways back home. Satisfied and happy to have been out and about once more. Our next gathering to look forward to. A Court and Livery Dinner at Cutler’s Hall on Wednesday 29th September 2021 – details will be out soon.