The Master – Last Weekend in September

“The last weekend in September was very busy. The new Sheriffs were installed, and Sheep were driven over London Bridge. 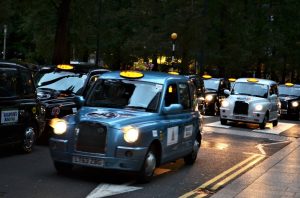 However, I doubt that any event was more exciting or inspiring than to witness 120 taxis leaving Canary Wharf, as dawn was breaking on the Friday morning, to set off on the 25th Disneyland Paris weekend trip organised the Worshipful Company of Hackney Carriage Drivers and in particular Phil Davis their current Master who has been the prime mover of this event for all that time.

The Mistress and I walked into East Wintergarden at Canary Wharf at 05.45 am to find the place packed with hundreds of people.

The Clerk was already there. 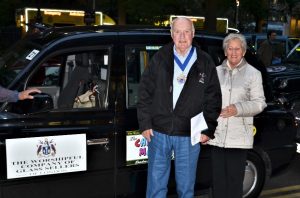 Teams of cooks had been up since the middle of the night to prepare breakfasts, packed lunches etc. The Royal British Legion (Romford) Band played rousing music throughout. The Lord Mayor and Civic Party were there, all to enjoy the atmosphere and to wave the children off to an extraordinary cacophony of sound.

They were escorted by the City of London Police, the London Ambulance service, the AA and the French Gendarmerie!

My predecessors have all said this is a special event and how right they were. The Glass Sellers Charity have been sponsoring a taxi for several years now and this is money is incredibly well spent! 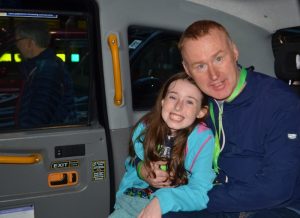 “Our “taxi was number 21 driven by Fred. He retired last year down to the West Country having done 24 trips. He was so determined to be back for this year that he hired a Black Cab at his own expense to take Alice and her father to Paris.

The Mistress, The Clerk and I found them all very special people!

Long may this event continue and our support with it.”