Tribute to Honorary Liveryman and Past Master, John Grafton Thorpe 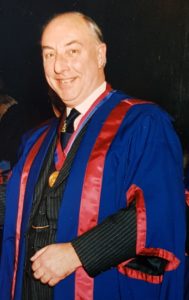 ​It is with sadness that  we report that Honorary Liveryman John Thorpe passed away late Thursday evening 26th March 2020. We had been advised that he had been diagnosed with Motor Neurons Disease in June of last year, though his wife Pamela thinks that it had been oncoming for some time.

On Monday last 23rd March he was taken into hospital with a clot on the lung and slipped away on Thursday.

Grafton had become a Freeman and Liveryman in March 1949. Both father and son were Lloyd’s Underwriters.

John then became a Liveryman of the Glass Sellers in September 1955.

He contributed much to the Glass Sellers Company as Keeper of the Ordinances, Archivist and Historian and was the author of our latest History. 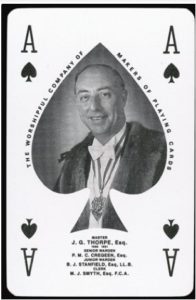 He and his wife Pamela moved to Swanage about 4 years ago which made commuting to London somewhat difficult so his attendance had waned.

In the early eighties, when working in the head office of what was Midland Bank, one of my responsibilities was the staging of exhibitions in the great Lutyen’s banking hall.  It was just before Lord Mayor’s Day and to mark it I had produced an exhibition tracing the history of the Lord Mayors’ Show back to its origins in 1189.

Soon after it had closed, I received a call from the reception desk to tell me that a gentleman was asking who was responsible for such exhibitions.  He was shown to my room and offered coffee.  After a few pleasantries he said “Have you ever considered a display of playing cards?

I have quite a collection and am a Liveryman of the Worshipful Company of Makers of Playing Cards”.  “Really?  I am a Glass Seller”.   Came the reply – “So am I.  I was apprenticed to my father in 1950”.  And on that spot was born a friendship which lasted nearly 40 years.  Well, the display of John’s collection duly took place and was very well attended especially by the bridge buffs with which the City abounds.  And how fascinating it was.  The history of playing cards goes back a very, very long way, and at that time, most of them were round.  And John had many examples of them!

But it was as a Glass Seller that I shall always remember him.  Because our friendship was marked by something else which was very special indeed.  In 1989, I became Honorary Clerk of the Company, and in 1996 had the privilege and pleasure of serving my dear friend as his Clerk during his Mastership.  So many, many happy memories of him and his wife Pam, but one event stands out.  His Banquet took place in The Mansion House, and telling our dear Beadle Tony Parker that “This one is mine – and no arguments…”  I was able to announce to the assembled Company “You will all be aware that this is our Ace occasion of the year (I’m not sure everyone got the allusion) but rarely, if ever, has it so happily co-incided with the Master’s Birthday!”  And to a storm of applause a hearty rendition of Happy Birthday to you took place.

Over the last few years, age and distance conspired to keep him away from us, but we kept in touch although he was finding speech difficult at telephone.  And a month or two ago, his wife Pam telephoned to say that he wanted to return his Court gown to the Company, and she sent it to me.  Just now, it is in the vault at Stationers’ Hall with the others, and when it is allocated to another new member of the Court, He, or She will learn from me of the distinction of its original owner – and told to wear it with great pride.

John was a wonderful example to all of us as to what it means to be a Glass Seller. And he was my friend.

I got to know the, quiet yet persuasive, John when a fellow member of our Court.

Whilst Prime Warden, he casually mentioned quietly to me that he was thinking of visiting the USA for his Master’s Jolly. and might I be interested in organising the detail for him? – how could anyone refuse John T??

We visited other fascinating places /sites, including seeing a flying copy of the Wright Bro’s original aeroplane. We think some 30 folks participated in the Jolly.

I recall flying into the States, walking round to the deserted Bus Station & waiting at the specific bus stop that the bus company had emailed to me. The bus was late …. and when it finally arrived it collided with and slightly damaged bus stop roof – delaying us another 1/2 hr waiting for police to arrive …. Hey Ho!

I am very sorry indeed to hear of the death of Past Master, John Thorpe. He was an interesting and lovely man. He was already writing his history of the Glass Sellers when I started out on trying to create a permanent archive for the Company. He helped me with advice, and I supplied him with my detailed record of Masters, Clerks and Beadles, all with dates, for his book, which he graciously acknowledged. He and I both appreciated the many hours it takes to trace and build up records. He was a kindred spirit, and I was delighted when all his hard work was recognised with Honorary Livery status. We will all miss him.

One or two of my memories for you. Back in 2008, when I brought Baroness Knight of Collingtree as one of my guests to our Mansion House Dinner, I also brought Mr & Mrs John Thorpe. They are friends who live locally here in Northamptonshire and I thought it would be fun to introduce John Thorpe to John Thorpe. (My friend went on to be Master of the Farmers Livery.) Sadly, our Glass Seller John Thorpe did not attend that year, so my plan failed, and I never did manage to get them together!

Next, I refer you to the note in the last section of the Archive Blue book headed “History of the missing badge”. John was always visiting antique shops and fairs, no doubt searching for rare playing cards, and I recall him showing me some old rare French ones he had found when we were on Tony Hammond’s Jolly to Bordeaux.

He was always helpful and kind to me and we used to chat together at functions. Although I have not seen him for a while now, I feel I have lost a genial friend.

My main memory amongst many is of his ground-breaking ‘jolly’ in 1996. He took us to America to visit the Corning Museum of Glass which he and Pam had visited several times previously for, I think, summer lectures. It was an outstanding success and culminated in an invitation to return in 5years. By a quirk of the occasion of the millennium my Mastership was deferred to 2001 so it fell to me to take us to join in the celebration of 50 years of the Museum and 150 years since the Corning Glass Co was founded. The intervening years had seen a growing relationship of our Company with the late David Whitehouse, Director of the Museum, which John began, and which continued up to his untimely death a few years ago. He graced a number of our events when in the UK.

John was also keeper of our Ordinances and, boy, did he make sure we did, whilst supporting most of our applications of them to our modern world.

John collected old books. He was rummaging around one day, I think in Bermondsey, when he spotted on a stall our Hon Chaplain’s Badge which had been lost or stolen (I’m not sure which) some years earlier. He promptly bought it and presented it at the next Court Meeting.

On a personal note he was supportive of me throughout my active years in the Company, and I shall miss him, especially his dry muted humour.

The Funeral will take place at The Chapel, Poole Crematorium, Tuesday 14th April 2020 at 14.00 hours.