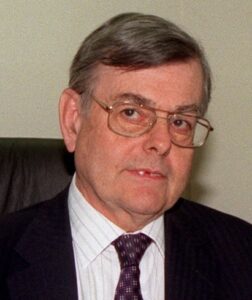 In honour of Past Master Sir Anthony Hilgrove Hammond KCB QC who passed away on Wednesday 24th June 2020 following a long illness.

John was born 27th July 1940 in India, the son of Col. Charles William Hilgrove Hammond and Jessie Eugenia Francis. He was educated at Malvern College and Emmanuel College, Cambridge, graduating with a Bachelor of Arts degree in 1962 and a Bachelor of Laws degree the following year.

He was articled to London County Council in 1962 and worked as a solicitor with Greater London Council on admission in 1965. He joined the Home Office as a legal assistant in 1968 and, after several promotions, served as its Legal Adviser between 1988 and 1992. He then worked in the Department of Trade and Industry, eventually as Director-General of Legal Services, before he was appointed HM Procurator General and Treasury Solicitor in 1997. He left the office in 2000, and then worked as a legal counsel to Hakluyt & Company until 2005. He was also Standing Counsel to the General Synod of the Church of England between 2000 and 2013

In January 2001, Hammond was appointed by the Prime Minister, Tony Blair, to lead an inquiry into the Hinduja passport scandal.

He was made a Freeman of the Worshipful Company of Glass Sellers in September 1990 and then received his Freedom of the City of London in  1991, He joined the Court in 2000 and went on to become Master in December 2006 till December 2007.

He was appointed Honorary Queen’s Counsel in 1997 and appointed a Companion of the Order of the Bath in 1991, he was promoted to Knight Commander in 2000.

Past Master & Past Clerk, Brian Rawles

Tony Hammond became a Liveryman in June 1991 during the early part of my Clerkship and led a peaceful livery existence for some time until the then Master asked me if I could suggest someone to propose the toast to the guests at the luncheon following one of our Sunday morning services at our Guild Church, St James Garlickhythe.  In those far off days we held a summer and a winter service on Sunday mornings followed by luncheon in the River Room at Glaziers’ Hall.   These were wonderful family affairs and usually a sell-out, sometimes, with a waiting list – the River Room only holding 120.  So it was that we first heard Tony speak.  And what a lovely speech he made.  A textbook example of an after-luncheon welcome to our guests.  And whilst he did not realise it at the time, that speech marked the end of his ‘peaceful’ livery life.  As a very senior Past Master remarked to me at the time “There is a future Master”.  And so it turned out to be.

But for me, he was particularly special, because apart from becoming a dear friend (what a place our Glass Sellers family is for acquiring those!) he was my Renter Warden during my Mastership in 2005.  And what wonderful support he gave me.   (You might think that Masters can do it all on their own.  Well, they can’t!)

We have all lost a dear brother Liverymen, and he will be remembered for a very long time – especially by those of us who were privileged to know him well.

We were sad to hear of Tony Hammond’s death, we have lost a very good Liveryman a very sad loss to us all.

My memories of Tony and Avril began with our joint love of Cornwall, we used to have lunch together at alternate venues when our trips overlapped, they to their house in Fowey and us where we rented in St Mawes, we usually joined up with Philip Feather as well.

My favourite memory was the year he was Master in 2007, his Jolly was in Bordeaux and he took us around to a number of Chateaux, the high spot was our visit to Chateau Langoa Barton where we were entertained by the owner Lilian Barton, he proposed to present her with an engraved glass bowl and since we were driving down to Bordeaux and visiting Edward and Phyllis Sainty who have a house in the Dordogne, I arranged to visit White Cottage to pick the vase up and spent the evening with Tony and Avril.  We even managed to deliver the bowl safely to them at the hotel and it was safely passed onto Lilian.  Bordeaux was where Avril herself nearly died and Tony managed to arrange to stay on and nurse her back to health to get her home.